Looking through the window from the outside of the Turf Projects space, the first thing you see is a sculpture – resin filled with plastic organs, like a model to teach anatomy in medical school.

And then shoes: peep-toe ankle boots, blue, see-through plastic like taken off from Kim Kardashian’s feet, filled with another, pink piece of plastic.

It shocks you and interests you. So you start to think what else you might I think, what else might I see. You walk in the first room of the exhibition.

The exhibition ‘Peaks & Troughs‘ by artist Saelia Aparicio, tells the story of flats that survived the apocalypse of development of Olympic Park in 2012. The exhibition is set in two rooms. Full of glass sculptures with the support of different mediums with an ink mural that gives the idea like the visitor is in the room of the flat that Aparicio is trying to represent. Second, a dark side of the exhibition presenting sustainability and commerciality of estates with metal fences, neons and small, mouth-blown sculptures.

With that in mind, let’s go back to the first gallery.  The ink on the wall makes your eyes follow around the room from right to left checking the artworks. You see the sculpture you have seen from outside, people lying on the floor (in Pompeii-esque poses), a little head hanging above them and a steering wheel beside and more organs in a glass.

Ink images seem to be disturbing – why? Because of discomfort and abnormality. First image presents a smiling driver in a car to which bag of trash floating on the water is attached. Following image is a black tunnel – reminding of death and famous sentence – ‘don’t go toward the light’. Following image shows folded people in different shapes in relation to buildings – such as stairs.

The artist gives an idea of exhausted bodies living in a space: as the artist put it “they get absorbed through our skin or respiratory system to sediment in our internal tissues, becoming part of us, increasing aggressive behaviour, premature dementia and being a known cause of cancer”, supported with transparency of the materials that become almost sexual and by that fetishised.

The second gallery is dark, lit only be neons at the back, who very cleverly represent the current situation of the housing market. But before you will get there, metal fences with colourful mouth blown glass bugs welcome you. You have to fight with ‘Eco-Warrior’ (2017) and be fascinated by a plasmatic organism. The order of the artworks seems to create some sort of labyrinth, and at first look, you wonder how to move around, not to break anything – can you take a closer look at the Warrior and walk in between fences? When you decide and approach the Warrior, you moving to the back of the space and see hypnotic, futuristic piece that reminds of some sort of amoeba trapped between two pieces of glass. And you just keep looking. When you look enough you realise the colours on the wall. These, at first thought, are just there to shine, but once found out that each of the lines represents different housing issues i.e prices the idea seems cleverest of them all.

With these two spaces, the artist represents well the bright side and the dark side of the estate. There are people that live in them, that soak in the pollution of the space and there is a dark side which is an unsustainable use of space for the one-off commercial purpose, that does not serve a purpose for people, but as a business market, affecting living space. Presenting that gives a new idea of usage of living space and because spaces are taken for business and making money.  The lack of living spaces in the city makes the process go higher, which causing a circle that unfortunately cannot be broken.

As a viewer myself, I needed a minute to understand the idea of the display, and that was only possible when I looked at all the artworks together instead of separately.

This exhibition not only relates to Olympic Park or Croydon, but to all boroughs of London.

Thanks to Turf volunteer Laura Mroz for this great insight into Peaks & Troughs. 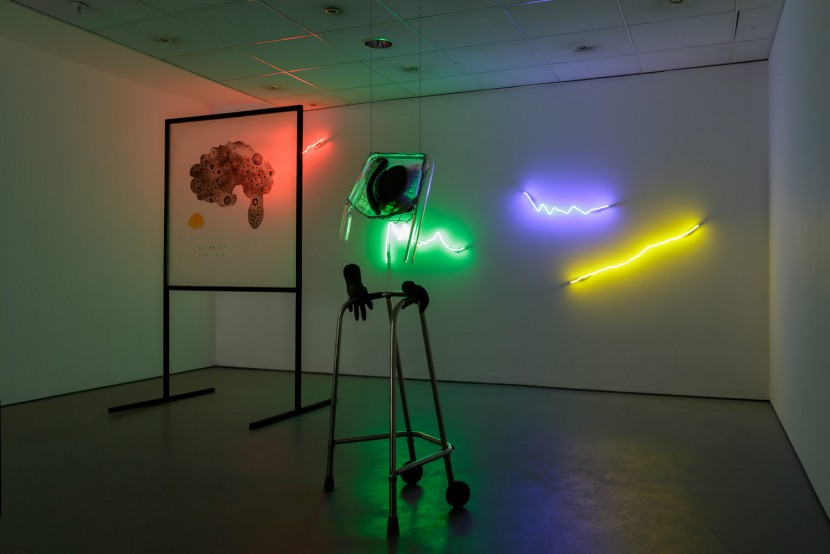