balancing, being in limbo, practicalities, juggling, having odd-jobs, carving out space, and modes of working within, outside of and along-side art institutional frameworks; a physical to-ing and fro-ing, ducking and diving, navigating and negotiating of place, re-positioning of self, flying limbs and swinging hips, a constant two-step.

The April Turf crit took the form of an afternoon of sit-down discussion, fuelled by tea and delicious almond and choc-chip biscuits. In between thinking through individual pieces, we spoke about the challenges and rewards of balancing, being in limbo, practicalities, juggling, having odd-jobs, carving out space, and modes of working within, outside of and along-side art institutional frameworks; a physical to-ing and fro-ing, ducking and diving, navigating and negotiating of place, re-positioning of self, flying limbs and swinging hips, a constant two-step.

Four of the group brought along works and ideas for us to turn over in conversation. I thought of each artist process as having a form or shape of its own – circular, straight, folding, and wiggling lines of thought, being danced out across the table, between the tea and bickies. 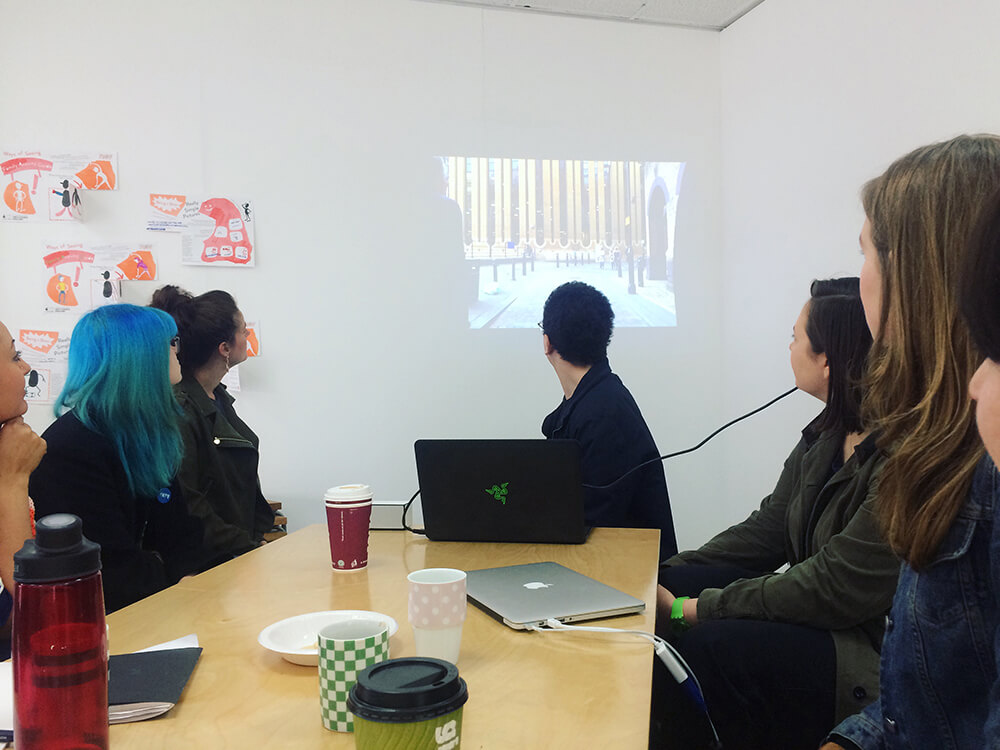 Rosie Eckmire presented a project in progress – talking through ideas for a piece in development for the final show of her Foundation course, with the aid of images scrolled through on an iphone screen. She would present a wall of charcoal and painted works, followed by the same wall with the works taken down, displaying traces of their former presence. She was most interested in viewer responses. We talked around the potential work, speaking about circular trajectories of art-making, disliking painting and growing to love it, coming back to things, and breaking free of restraints. We thought around the idea of accessibility and space, boundaries, outreach, being welcoming, feedback and readings of what’s in front of you. We thought about varying outcomes and formats for the work, as a documentation of collective response. Could it become a collection of surveys, audio interviews with student viewers, a performance, a book, or a curated exhibition of the work of others? And we considered Heman Chong’s chalkboards, Barby Asante’s open archives, and the Guerrilla Girls’ tactical utilisation of data collection.

Natalia Markowska shared a sound-piece with the group, entitled 110 minute line. We listened to a truncated fragment a rhythmic scraping of coarse materials. We guessed in turn: is it something large being dragged along pavement or something minute trailing along paper – chalk or charcoal perhaps… graphite maybe? It did what it said on the tin, but the line looked different in all of our minds. Are we allowed to see the real line? Do we want to? Is it an Abramovic-style endurance exercise? Does it matter that we aren’t going to listen for the full 110 minutes? Is it a performance, or could it be? We found it difficult not to ask the artist directly – to veer away from making them come up with all the answers. But we traced the line of thought, feeling it out, gauging its ‘measure’. Musique concrète cropped up, and one of the group linked the direct self-defining title of the work to 60s conceptualism. We thought about the shape of the piece, possibilities for technically mastering directional sound, of creating sharp, clean-cut audio edges; of guiding airwaves in a similar manner to how Anthony McCall and James Turrell carve out crisp lines of light. 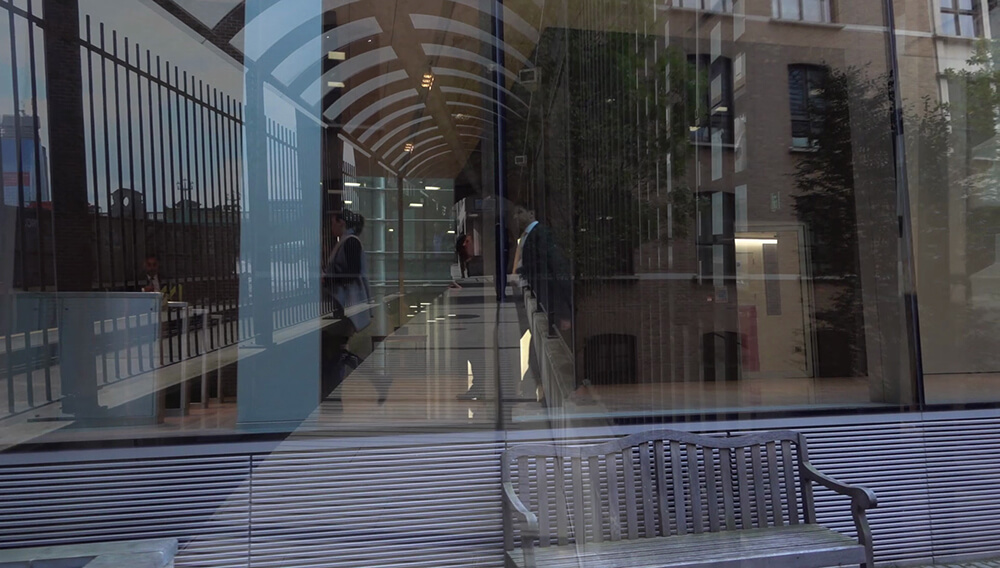 Nina Mcloone invited us inside – that’s what it felt like, close and intimate. Into concave plaster body casts, and between the pages of her journals, shredded and wound around these molds. She spoke of a desire to expose, while holding something back. Her black and white photographs presented sharply highlit foregrounds that dropped into dark space, where sculptural forms fell away from the camera; a pulling back and forth of closeness and distance. We considered potential methods of drawing that nearness out further, or opening it up. We thought of publications, the possibility of words hiding in a centre-fold, a series of images, containing text, and/ or interspersed by text, a small edition artist books, or zines, inviting one-to-one conversation, tactile engagement with flat flesh on paper, a thumbing through… Or scaling up and fly-postering a run of posters, taking the inside outside – that sort of thing.

Harold Robson was last to present and showed us a new film he’d made, called Telescope Earth. It was odd and angular, funny, experimental. In the opening scene, a pair of suited men stride out from either side of the camera, in sync, as if planned. We wonder if it was. It wasn’t. It follows a walk, flâneur-like through the centre of London, around Southwark Cathedral; pausing to consider a pidgeon marching neck-thrustingly back and forth in slow-mo; chopping to a voyeuristic frame that watches from the outside as figures enter a glass building, via revolving door. The whole thing has a sinister edge, cultivated largely in part, by its soundtrack. Harold tells us he made the music himself through a technique called ‘circuit bending’ – short-circuiting a keyboard. It reminded me of John Smith’s Girl Chewing Gum, with the overlaying of a semblance of control over character and scene, an editorial decisiveness on top of a street-view capture. We talked about reading into the work, re-working the work, roughness, a cut and stick approach, sketching, multiples and more to come…

Turf’s next free crit will be on 27 May, led by Ways of Seeing curator Tom Ellmer. 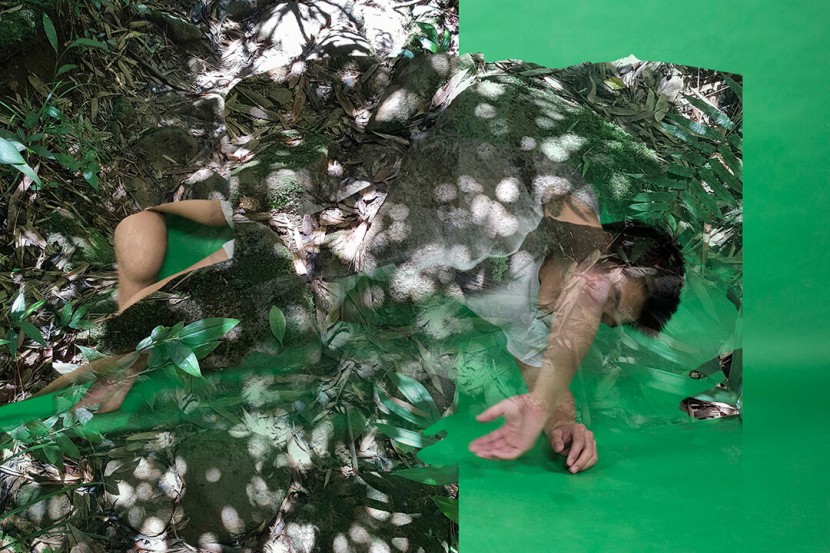