She suggested singing before a presentation, warm up your voice and get used to the sound of it.

Crits can sometimes be anxiety inducing; the formality of them, the dynamics between people, the distribution of ‘voice-time’, intimidation, tangents, miscommunication.

It was a windy day and the gallery project space had turned into a wind tunnel prior to my arrival, but with the doors closed it felt safe, it was intimate, attendees were generous and supportive. Chris Alton, Holly Graham and Amanda Luin presented work. All of their work was political, it felt urgent, as if there are stories to be told and they need to be told now. They all utilise mediums fluidly, slipping between materials that best deal with the specificities of an idea.

Kate Terris said not to wait for tomorrow to practice a presentation: begin now, 5 minutes today, get it done. Then rehearse it, over and over again. 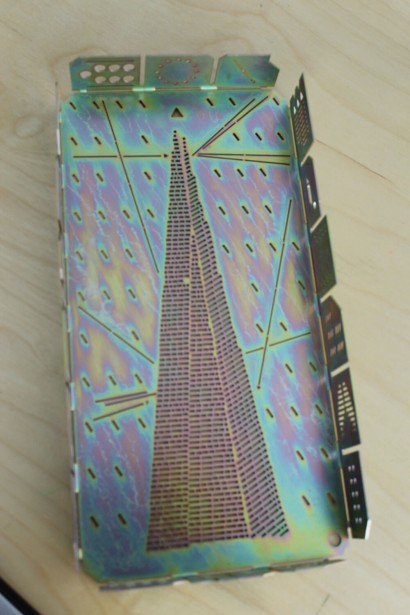 Shortly after the crit there was a workshop, ‘Public Speaking for Artists’, led by vocal coach Kate Terris. A large group of us sat around a large table taking it in turns to express personal struggles with public speaking. Kate Terris gave us advice: she was dynamic, her confidence contagious. It was a formative two hours for me, and her words have infiltrated my memory of the crit.

Breathing and speaking slowly helps to convey a message clearly.

A popular description of the unusual weather that day, and that year, was post-apocalyptic, like it’s on the tip of the tongue, waiting for a yellow sky to spit it out.

Chris Alton began the crit by showing us a photo of a recent billboard commission he had completed for Spit & Sawdust, Cardiff, called ‘ Crudely Plucking the Strings’: it reimagined the story of the 1607 flood of the Bristol Channel. The billboard included people and animals drowning in a flood that was engulfing what looked like a polluted town with a nuclear power station and a huge tree. It was a warning sign but it didn’t just feel like ‘the-end-is-nigh’; there was something romantic and mystical about the colours and the woodcut style drawing. The action looked suspended, the characters not realistic. Later in the crit we learned that Chris was made to watch Hollywood dystopia sci-fi ‘The Day After Tomorrow’ over 7 times in geography lessons. Chris’s billboard felt enticing and his characters draw you in, similar to how a Hollywood love story can draw you into themes of global warming. Or perhaps it is the depictions of natural disasters that lure you into a love story; a superstorm leading you into love.

After a brief discussion about the billboard, Chris introduced us to some early ideas for his new project. He did not know yet how the work would manifest but he was committed to retelling his Great Uncle’s story. In 1918 ‘Private William ‘Billy’ Stevenson (1894-1973) was on patrol in a sector of No Man’s Land, in the Bassée Canal Region of France. He was shot by a German soldier but only in the knee. His injury meant he was discharged from the army: the wound therefore saved his life, a gift from the other side. This section of Chris’ crit provoked interesting discussions about empathy and the possible eradication of empathy within military training. References were made to the Viking berserkers who were believed to have consumed drugs to prepare to fight and also more contemporary methods or mind tools utilised in military training. We spoke about the possibility for this project to manifest outside of the gallery, perhaps in writing. 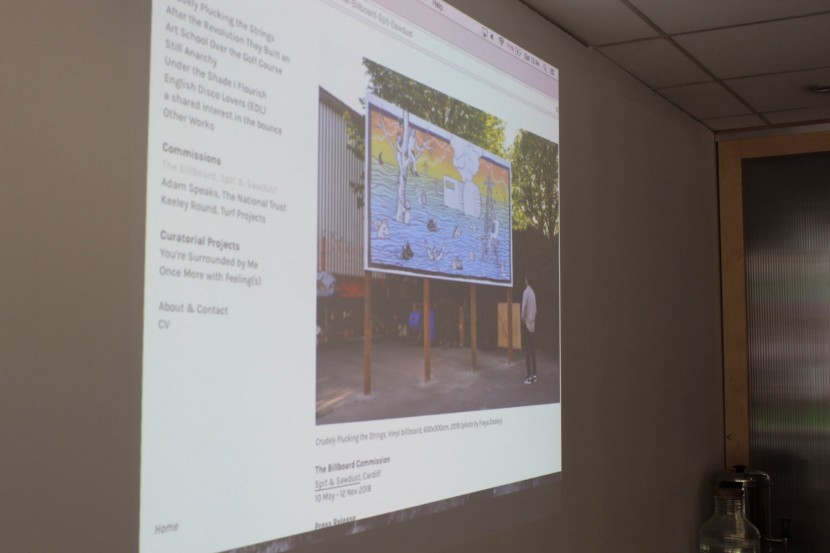 Apparently trauma can be passed down through our DNA. There is an urgency with this project, gathering family histories before they are lost. We wondered whether the wound from the German soldier wasn’t a gift but an accident, and thought about the slipages from factual accuracies into fictions that inevitably occur when retelling stories or remembering.

Kate says that you need to breathe and speak slowly to allow oxygen to the brain, if you don’t, it can cause short term memory loss, mind blanks, and panics 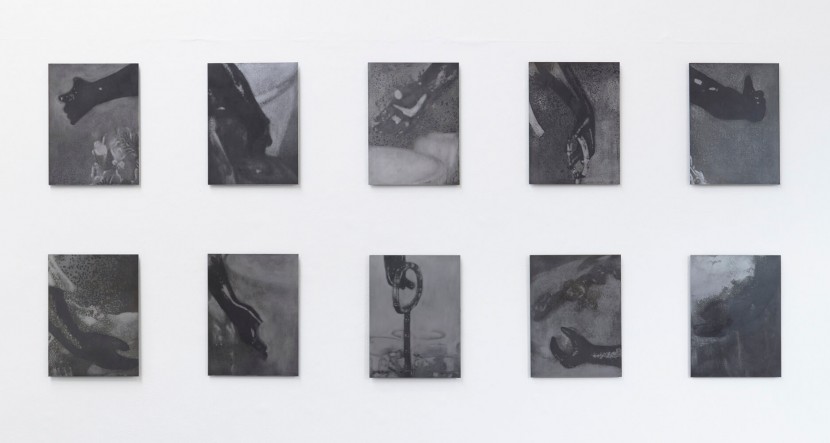 Holly Graham showed us a series of sugarlift etchings on steel, part of a group of works that were commissioned for the Jerwood Visual Arts Project Space, within the gallery café. The etchings depict the hands of figurines from the late 18t h century porcelain ‘blackamoor’ sweetmeat/sugar bowls. In contrast to the glossy and impersonal finish of the figurines, the etchings have a very distinct texture, from certain angles they have a sheen but close up they look porous, even sculptural. You can see the printing process in the final execution. There is this handmade warmth to the prints, yet the cold steel and disembodied survient hands that reference the figurines’ gestures are arresting and unforgiving. The sweetmeet bowls are in the V&A, online and are still in circulation, being sold around the world. We spoke about the distressing idea of these objects still having currency. The violence inherent in these objects and their references to the sugar trade was directly confronted in an audio piece that accompanied the prints. It included interviews with eight V&A African Heritage tour guides. The voices of the tour guides are layered on top of one another. Stories are heard simultaneously and the piece begins with a focus on domestic, internal space, discussing cakes, taste, family recipes and sweetness. Orbiting this visceral, tangible hook, the interviews begin to move into discussions about the context of these ‘blackamoor’ bowls, their histories and what they symbolise. The fragmented way that Holly layered the voices made the digestion of the interviews very intense and affecting. It was informative but penetrating: it gets to you, stays on you, sticks to you, and needs to.

Holly presented images of the works from her Instagram account. The content written below the images provided us with additional context. We discussed concerns about how much to say when presenting or describing work, as well as how much to say within the work. Back to thinking about urgency, maybe sometimes it is vital to be direct. After discussing this project, Holly spoke about possible ideas for plaster casting her own hand and arms as a sculptural development from previous ideas. I recognise this uncertainty before embarking on a new way of working: there is an investment involved, both in time, money and emotional energy. I tend to think that the itch is probably there for a reason so scratch it and acknowledge the importance of play. For me, instinctive material decisions make available more concrete ideas or conclusions, they lead.

Kate suggested analysing the way people speak and using the bits you like for yourself.

Amanda Luin turned up with a bag of objects. First, Amanda showed us three cyanotype prints on cloth that included representations of towers as well as technological, tribal and religious imagery. We spoke about the significance of using this blueprint process in relation to the myriad of visual references imprinted onto them. The three cyanotypes acted a bit like a moodboard that shared Amanda’s research. I felt vertigo looking down at them all at once. Next, Amanda showed us a selection of small sculptures that depicted skyscrapers in relation to boom and bust economies. The works are fabricated in an industrial metalwork factory. They are laser cut, polished and then coated in a hardware material, leaving a seductive sheen to the metal. This, combined with the intricacy of the cutting, creates quite alluring objects. We noticed a Wifi symbol and something that looked like a computer circuit board cut into the metal. The signs and symbols buried within these sculptures, slowly evaporate with time spent looking at them and, due to the sculptures’ decorative nature, when you spot the references it feels all the more surprising. Amanda represents the tower and information technology as mysterious rather than functional, conservative or rational. With a focus on repetition maybe there is a suggestion of hubris in the works. The sculptures seemed to highlight a ridiculousness involved in erecting a skyscraper, as if height equals power and as if the shadow it creates has no repercussions. 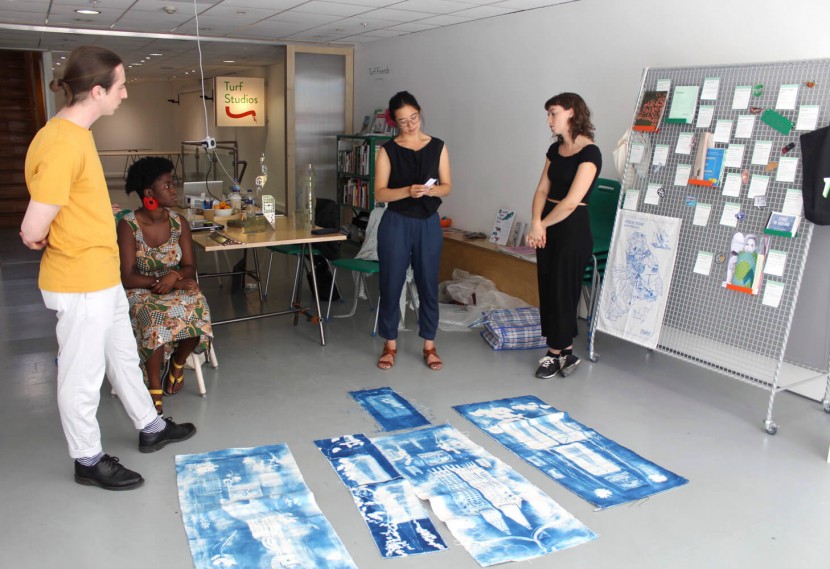 Take up space, Kate said, whilst flinging her arms around, own your space.

At the end of the crit Amanda handed around small bits of paper with provocative aphorisms on them, written in capital letters. We wondered whether it is possible to still be subversive when advertising and fashion co-opt activist rhetoric for capital gain. Similar to the small metal objects, they are made to be held but they are weighty in content, leaving a lasting impression.

My friend told me that being sensitive makes life more vibrant. This crit revealed the sensitivity and struggles involved art making. It was a privilege to witness the artists’ process and to hear everyone’s input or reactions: it’s worth any crit-associated-anxieties. We need to talk. I need to learn how to do it better. There is no time for shyness anymore. I need to breathe and listen. Thanks Turf for inviting me, to Holly Graham for her art and helping to guide the crit, and to Kate Terris for the advice.

Many thanks to Shonisaurus Popularis exhibiting artist Hazel Brill for leading the crit and for this writeup, and to vocal coach Kate Terris for leading Groundwerk workshop in public speaking for artists.

Turf’s next free feedback session will be on 25 August led by illustrator Jhinuk Sarkar, followed by Groundwerk 3.4, an intro to accessible curating. 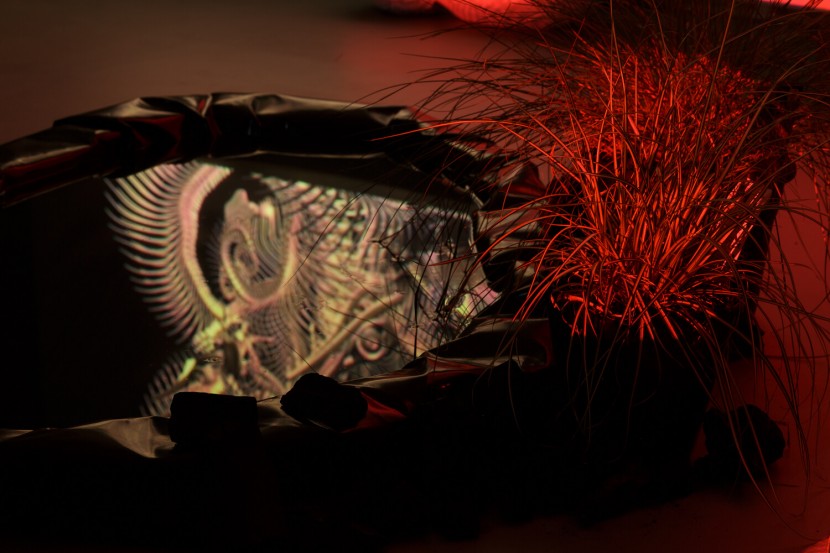 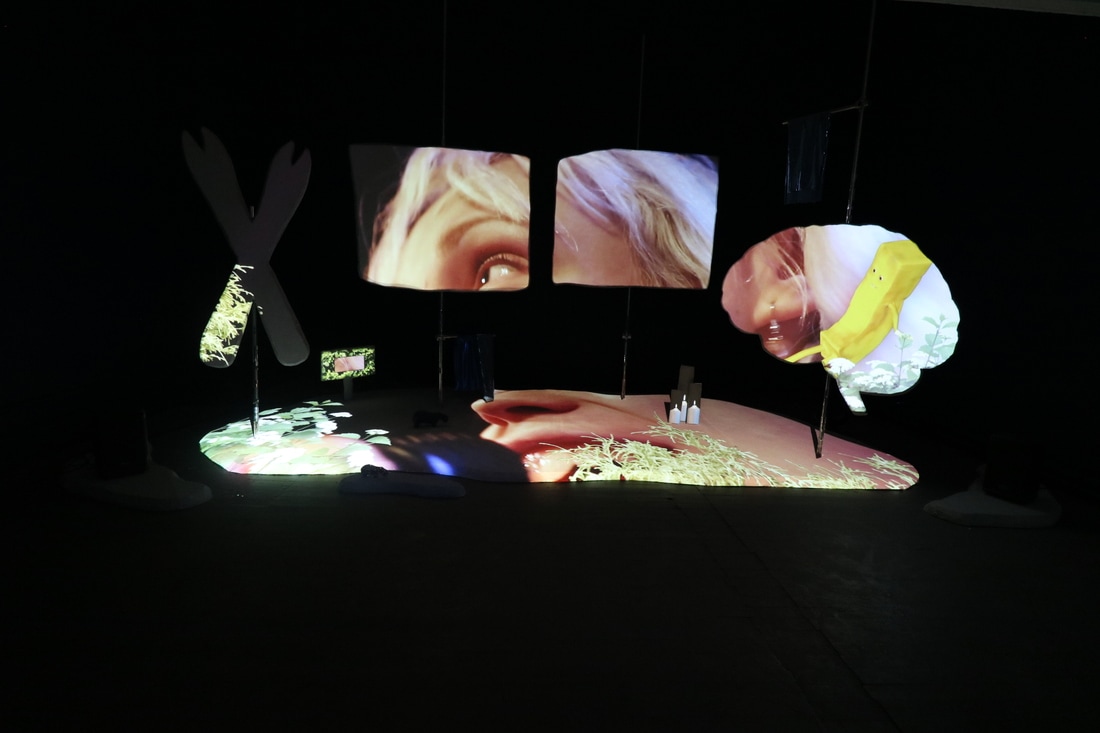