It was a privilege to spend a Saturday afternoon in the company of the artists who so generously shared their work at the lunchtime feedback. It’s a pleasure to spend time with artists and their work, together in dialogue with each other. You normally either get one or the other. Over a packed afternoon, we experienced a truly diverse range of practices and research.

Starting with Freya, who presented a performative video. We see a figure in a morph suit, grappling with a tangled string of fairy lights. Shot in grainy, high contrast black and white, we see the figure slowly untangle the lights. It’s a simple piece, powerfully anchored in a task. But the work is transformed by its formal presentation. The lights look like a constellation of stars as the figure holds them. It’s like she is holding the galaxy. It’s a captivating work that drew strong responses. I particularly liked the tension between the state of wonder and beauty of the lights and the sinister quality of the masked figure contained in a dark space. It was great to see this work was part of series. I think as a body of work it will have more impact. The repetition of the figure enacting these gestures had so many powerful echoes of early silent film. With works from Buster Keaton, via Steve McQueen’s ‘Deadpan’ coming to mind. I’d be really interested to see how Freya shapes the context for the work through its installation. I was thinking of artist Samson Kamablu’s installations as a useful reference.

Hilda presented a series of vividly coloured abstract paintings. There was an emphasis on strong blocks of colour and dynamic, gestural mark making. Because of time constraints we focused on one particular painting. The painting featured a yellowish shape, which people seemed to both identify as the sun and a spider. These differing observations reinforced the strength of the image. The yellow shape is being engulfed by darkness as a dark colours surrounds it. As we were seeing slides of the paintings, it’s difficult to get a sense of the texture and surface of the work, something that I feel is really important in reading painting.
However, I did really enjoy how many of the colours and shapes were interlocking and intersecting suggesting an internal dialogue within the work. Hilda also presented a quote, sadly I forgot to note down where it was from, but there were blank spaces in the text. Hilda talked about how these blanks spaces in the text echoed blank spaces in the paintings, brilliant I thought. I remembered as we finished the conversation all to quickly, Hilda’s assertion that she wasn’t defined by painting and she did many other things. I was left wanting more.

Youngsook, presented photos of a series of assemblages she has been making. The looked at big themes: nature, religion and empire. The work itself features everyday objects transformed through particular configurations. We talked primarily about one photo of an arrangement of mops, brushes and washing up gloves. Equipment associated with cleaning and domestic work. The objects have a map of the British empire with trading routes placed on top. The arrangement of objects reminded some in the group of a coat of arms or heraldic imagery. This is something I thought was a real strength. After all, heraldry is all about a projection of ideology and power through symbolism. I really loved the politics of the work. There was some fear from Youngsook that it might be over determined, but I think it’s more to do with the work finding a coherent visual language. I was really impressed with Youngsook research and reading of the subjects she is engaged with. I wonder if that should be more manifest in the work? But maybe it is already, it made me think a lot about work, labour and imperial nostalgia.

Francisco presented two small black lined drawings. These were surrounded with large ceramic frames. These are part of a much bigger series of works. The drawings themselves are intimate, erotic and intense. Francisco described the work as, “drawings in response to encounters”. He referenced the notion of gay silence, and talked about self-ethnography. This really shaped my experience of them. There is a real tension between the small drawings and the heavy frames. The ceramic frames are more bombastic, one in relief has images of lips and suggestion of figures speaking or communicating. It was really great to experience the work and its materiality. We talked about the domestic scale of the work and how a larger series might work. Although not Francisco’s intention, I really liked looking down at the work, flat presented on a table. The work operates in this space between an object and image in that context, its of course both, but your relationship is shaped by this encounter. So we’re back to encounters and relationships in the work and with the work.

Emily showed an extract from her film. The film showed beautifully composed shots of hands chopping vegetables before going into a sequence of footage of Emily’s grandmother (I hope that’s correct) showing objects she collected including an amazing shoe. Overlaid is the sound of women talking in conversation. This is subtitled in English with the conversation focusing on memories and recollections. It’s a really well put together work. I really like the pathos and observation of domestic work, there is a real intimacy that draws the viewer in. In fact I was often so drawn in by the images that I stopped reading the subtitles. The film remined me of many of the filmmakers I love, Chantal Akerman’s cool, but political observations of the everyday, Trinh T. Minh-ha’s embeddedness within her subject material. Emily showed how she had presented the film in the context of an installation. The video was screened on a laptop, on a table with headphones. The space had plants and there was the opportunity to have tea and sit with the work. Initially sceptical of this approach, Emily’s rationale forced me to question my own sensibility and my desire for big projections. This work is about proxmity, sharing and intimacy, there is great generosity in extending that to the viewer. Thanks Emily.

Claire shared some ideas she has for an upcoming performance. Her intention is to stage a bingo event. Using images, audiences will have to identify with stories about women’s experiences. Claire had some laudable anxieties about representing other people stories. We had a great to discussion about the politics of who can speak for whom and how identification and empathy work. We talked about the importance of full disclosure and consent if you’re working with collaborators or drawing up other people’s stories. Personally, I feel there is an important role for advocacy. I thought Claire should also acknowledge to brilliance of the format she is working with. A game show/ event opens up the possibility of drawing in other voices and creating a platform for others. I don’t think she has to solely take on the burden of representing all the stories. But her idea creates an interesting space for dialogue with audiences through the disarming guise of entertainment.

Performance art duo Knot presented a special performance. Announcing they were going to do a performance, they got up and walked out of Turf Projects into the Whitgift shopping centre. Surprised and curious, we all followed, speculating where they might be going. Eventually, they picked up some orange buckets and started moving towards a set of escalators in the middle of the shopping centre. They stood and played out some clear and simple choreography. Holding the buckets they would stand on opposite escalators, one going up the other down, holding the buckets. By this time, a small and very animated crowd of Croydon shoppers were looking at the performance and asking questions. The effectiveness of the work came directly from surprise and the command of public space. Shopping centres are private spaces pretending to be public. They are incredibly policed and controlled spaces. So, to make a performative invention that quietly and powerfully disrupts this space is amazing. There was absolute focus that was completely captivating and enticing. But as much as the work held its own, my experience of it was made by watching it with the Croydon passersby many of whom were documenting and one point confronting the performers with question. I loved how people approached the work on its own terms, questioning and providing commentary of what it was and its significance. As pompous as it sounds, this is the purpose and function of art the engage and entice questioning of the world around us. The telling moment was when the performers walked back to Turf projects space, we were joined by various passers-by, as we re-entered the gallery space, they all stopped. Many looked disappointed as they realised and were told it was art project/performance. Their refusal to enter the gallery space was very telling. Sometimes the naming and branding of art gets in the way. It’s something I think about a lot.

Djofray presented a film. It was an extraordinary and compelling mix of digital and stop frame animation, video and live performance. I was really aware of the working presenting us with alternate realities and representations. We see the same figure animated through stop motion, digitally and live. I really like how the work positioned you in the head and body of the character. I thought it was disorientating but totally captivating. Sadly this was one of two works we didn’t have time to talk about. The most striking moment was when Djofray interacted with a character in the film. Holding this amazing dialogue again about the perception of reality. I thought this was an incredibly brave work, fiercely honest in its depictions of the inner psychology of a black man. I was so impressed by Djofray’s decision to use the feedback session as an opportunity to engage with an audience. I can wait to see more work.

It was an amazing few hours, that left me wanting more. It’s easy to forget how brave an exposing it is to share your work and yourself. But I have to thank all the artists for their generosity in sharing their work and engaging with each other’s work. I felt there were some amazing and striking new voices in the room. It was a pleasure to look, listen, talk and learn.

Big thanks for Harold Offeh for leading this Artists’ Lunchtime Feedback session and for this response! Harold’s exhibition, Croydon Plays Itself, continues at Turf until 2nd March 2019.

Our next Artists’ Lunchtime Feedback runs on the 23rd of February with artist Milly Peck. 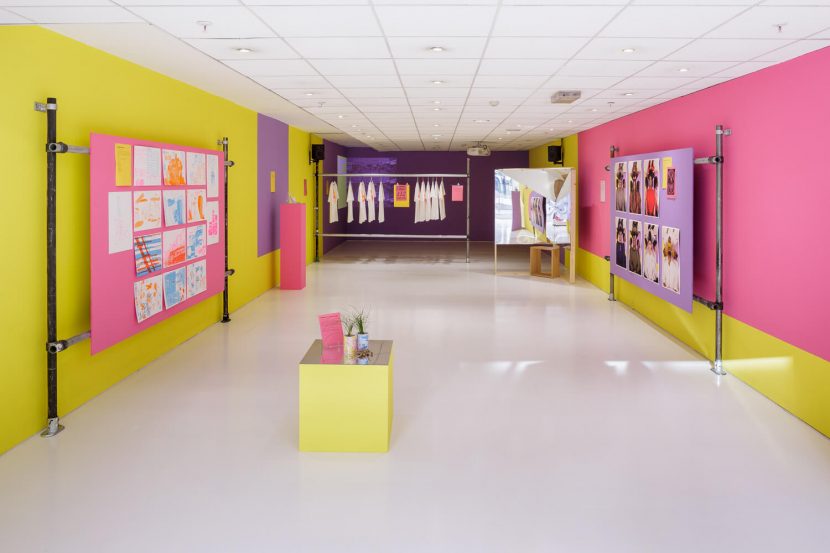 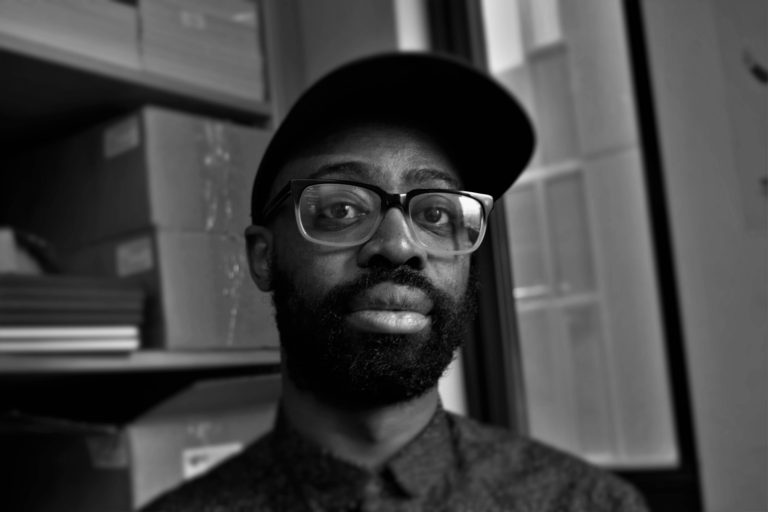