It’s the beginning of 2021. We are all hoping that this year will be better than the last.
The hardest thing for me to get used to has been translating work to be presented online. So I was excited to see the work and how it was going to be presented as part of the crit. We started with collaborators Henrique Paris and Krissie Marie their collaborator. They prompted the question of “What is postmodernism?” and wondered how they could embed this conversation within the work. They wanted to create photos centred around a dress which they wore during communion when they were younger. Restaging these photos wearing the same dress they aimed to reclaim that moment of their history. We talked about how the environment that they take these photos in could really help make the conversation around claiming heritage and refusing colonial narratives. 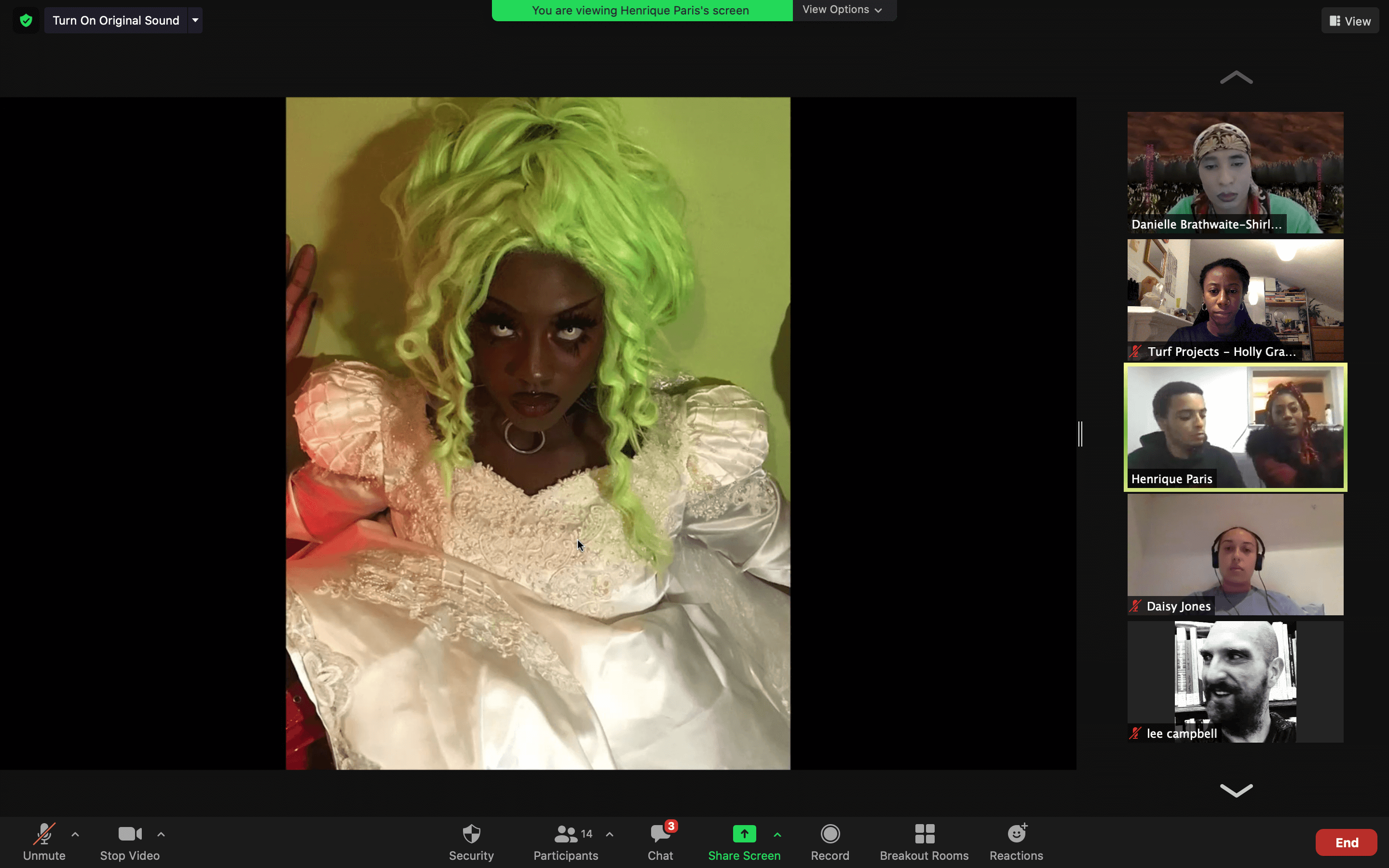 Next we had Lee Campbell who did a live Zoom performance mixing video sound andspoken word all underpinned using the green screen effect on Zoom. The performance was messy with moments of clarity amongst a cluster of elements. We shared our appreciation for the creative use of the Zoom green screen effect and how they used their back as a canvas. For me the effectiveness of the work lay in how Lee could further push the impact of the moments of clarity within the performance. 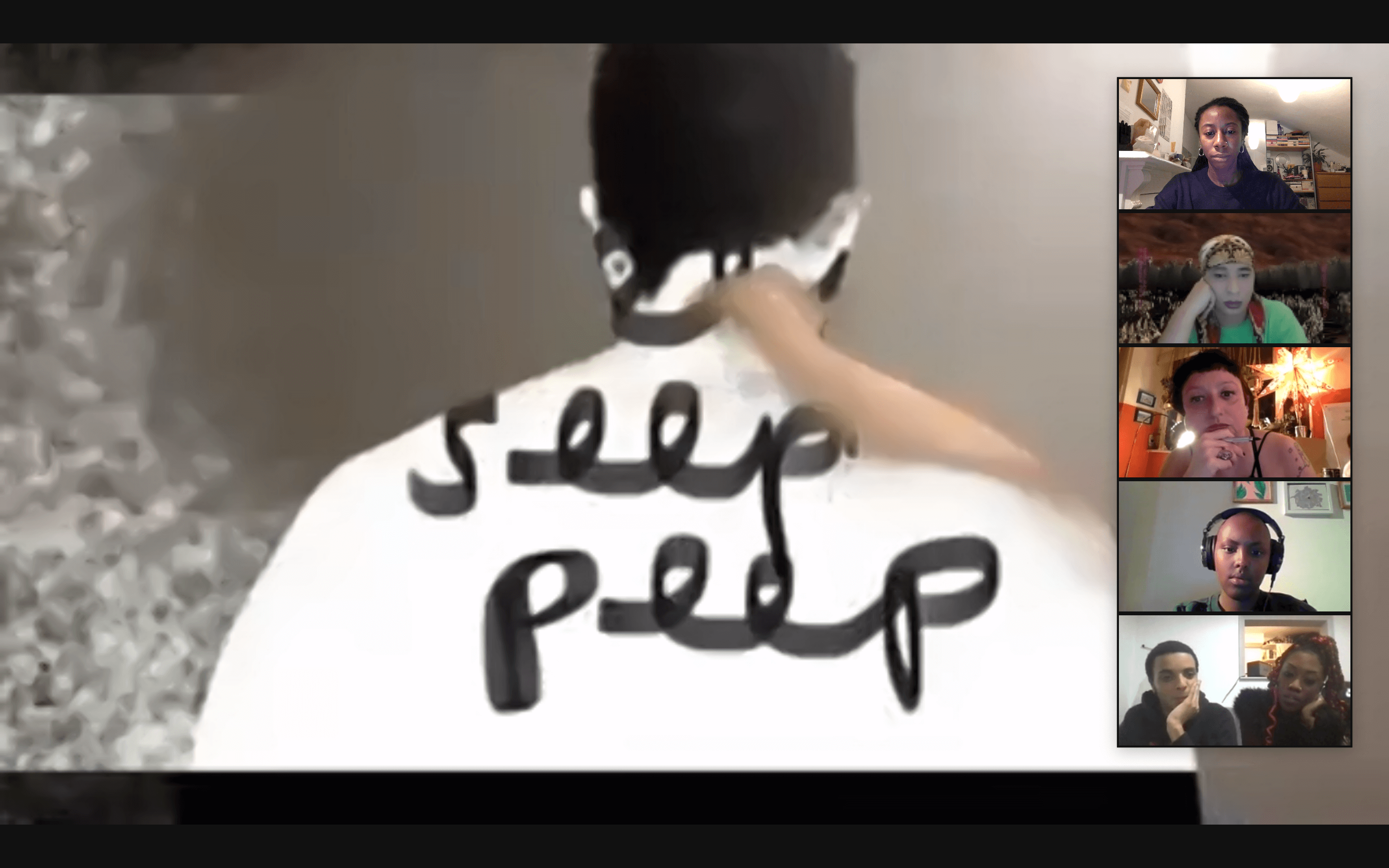 .
Next it was Daisy Jones. Daisy presented a website based around the history of black awards and joy within the movie industry. It worked as a collection of thoughts and an archive of those moments. We encouraged Daisy to release access to it as this work played on the line between archive and art and so felt that its place within the public was a huge part of the work. This work engrossed me and although we couldn’t use it yet I was excited to see how Daisy would push interactivity on the site. I also suggested Twine for Daisy as it would be great for them to use the tool as a way of creating more works based around internet archiving. 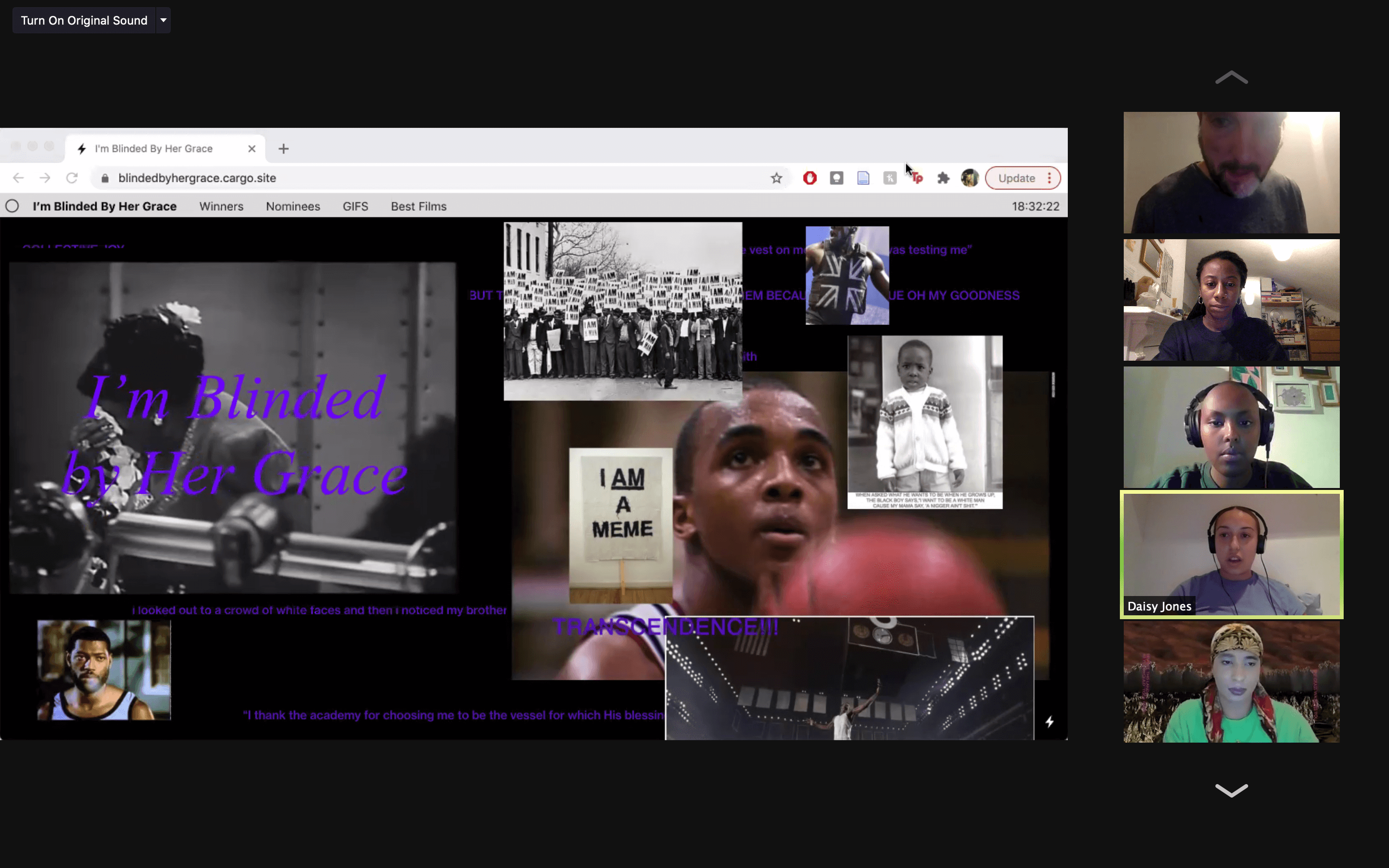 Stavroula Lialiou showed us a short film they shot on their phone.The film was a shot of them walking down the road to a station from a 1st person perspective whilst humming a song. Some people shared that the video made them think something bad was going to happen and others found it peaceful. We found that Stav was more interested in the conversation generated when people looked at the video and on how people with different experience would feel about the video. Stav wondered if they needed to shoot it with a more professional kit but we felt that it wasn’t necessary. 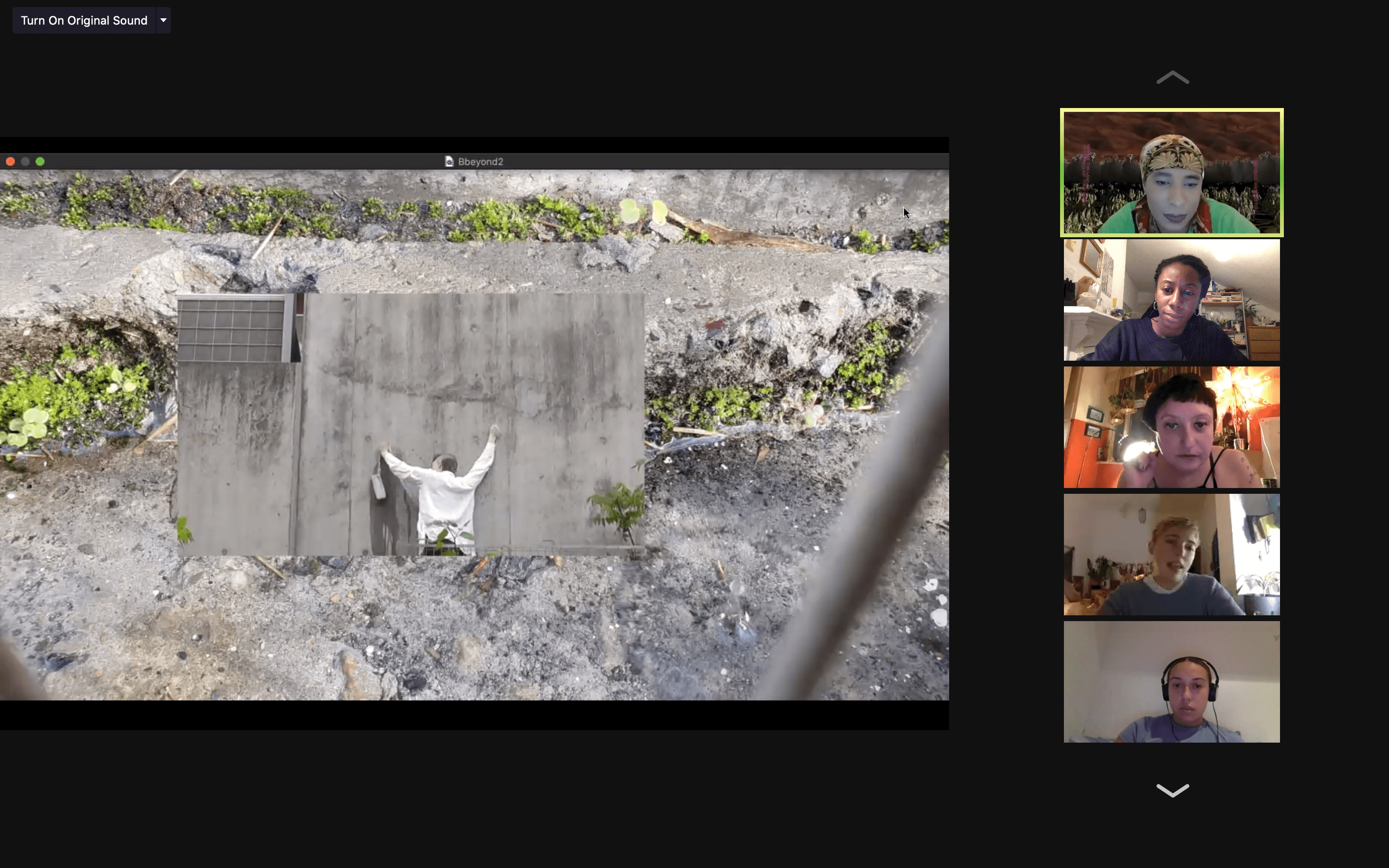 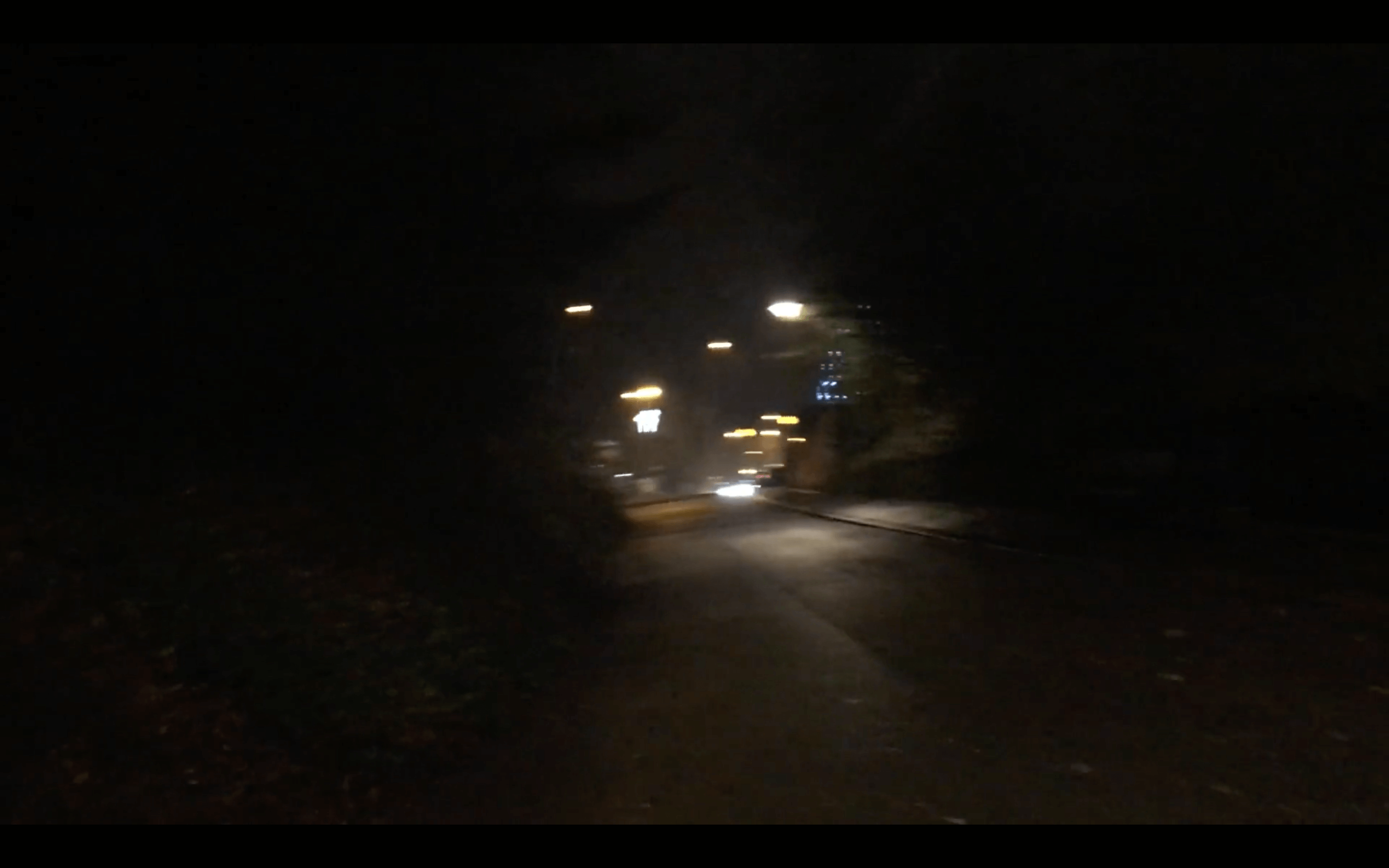 Lastly it was Kate Stonestreet . They shared a video of a performance of someone wetting a wall. It was quite mysterious. It felt as though it was about imbalance but I am still not sure.
I suggested that it needed a presentation that would reinforce this concept of imbalance through watching.
Overall it was a really interesting session of very varied works. I look forward to possibly hosting more 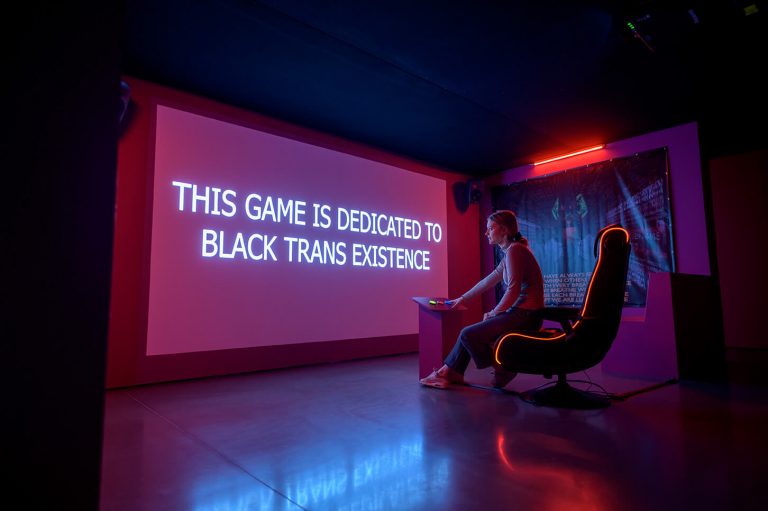