Our crit was really well attended with many of the group wanting to share work.
For this reason, we tried to fit in discussing as many people’s work as possible, which led to a fast paced and lively discussion. In retrospect it might have been better to focus on just 2 or 3 artists, but there was some great energy in the room and it felt important to nurture this, so we opted for a short presentations by 5 artists.

Christina shared some mixed media works that came out of a residency she undertook in Peru. Her work is very layered and deeply invested in engaging with personal and social histories, which feeds into her work with communities and vulnerable women. The images Christina shared will form a book-work she is making to solidify and bring together the works she made in Peru. Weaving together folklore, creation myth alongside contemporary politics affecting indigenous communities in areas of primary jungle, these images form fragments of a larger body of work that

Questions that we discussed centred around use of narrative, juxtaposition of myth and socio-political issues, the notion of travelogue — particularly from a decolonial perspective — and the need to think carefully about boundaries when working with vulnerable people. We also spoke about the importance of Christina’s own experience and subjectivity in the work and also perhaps focusing in on one specific idea or issue in each work/chapter — as the political and emotional terrain that this project covers could be quite overwhelming.

Andy shared a new painting that explores the notion of a ‘divine masculinity’, drawing on his own relationship to the male role models and the significance to his life and work of growing up without a father. Andy’s use of colour, pattern and symbolism is visually arresting and our conversation returned to role of mythology and symbols in his work, in relation to Christina’s. The painting deals with ideas around transformation, asking questions about transforming ideas around masculinity — which strikes an interesting relationship to his use of colour (a very sharp fluorescent pink) and how this could relate to gendered notions of colour.
We also discussed Andy’s decadent use of pattern and how it might be interesting for him to consider working with textiles as a surface — perhaps experimenting with scale and different drawing/painting techniques such as batik. 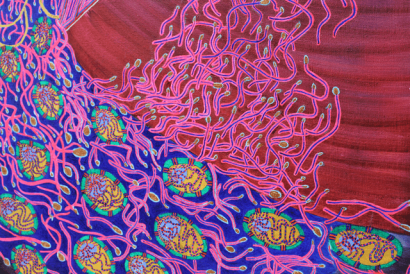 Rob shared some recent paintings with the group made both at home and in the park. We discussed the diaristic nature of his work — how each painting refers to a specific moment in time from his day-to-day life — reading a magazine about star wars, sitting in the park, or listening to music at home. In this way, Rob’s works chronicle his life, documenting things he observes or enjoys. Rob used several different techniques in the paintings, including drawing, watercolour and finger painting and chose to show us the works in frames, rather than the big folders of drawings he has many of his other works in. It was interesting to see them in this context, rather than in book form. We discussed the idea of ‘graphic medicine’ — Rob took up painting after losing his Mum and he’s found it really cathartic and healing, and it was interesting for us all to reflect on our own motivations for making work.

Deborah shared with us her recent film made as part of the ICA’s programme First Acts. Again, there were some really interesting connections to the use of folklore explored through a contemporary lens and the potency of particular stories that are handed down throughout generations (in this case Anansi in West African and Caribbean folklore). Deborah has used Anansi to tell a modern day story of resistance, working with two children to create a powerful film-work which explores the urgency of social action, but also the importance of play and the universal potential of stories in imagining a different future or way of being.

Connecting to Christina’s work, we spoke about use of narrative as a way of connecting and empowering people. Deborah spoke about her interest in developing workshops engaging with ideas around folklore and community action — which could be a really interesting direction to the work alongside the film. We also spoke about the importance of the soundtrack as a way drawing viewers in and Deborah’s choice to shoot analogue film. 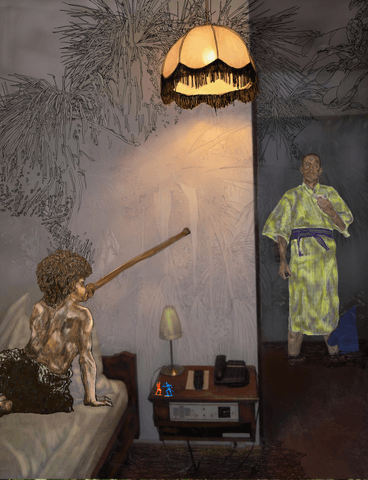 Paul shared some paintings made in relation to dreams and prophecies. As a way of processing visions that Paul received in dreams some years ago, he creates paintings that tell the story of these experiences, using symbolism and often quite disturbing imagery to convey their intensity. Paul sees his work as process of transmission — painting the dreams he has, a way of communicating their urgency and relationship to global events. We discussed his paintings in relation to the artist Paula Rego and whether it would be interesting for him to research the relationship between subconscious and dreaming.

To conclude, there were some super interesting cross overs between the works shared and I’m excited to see how everything develops. This is a really strong peer group and there’s the potential for some really fascinating continued conversations about relationships between narrative, symbols, folklore and her/histories — and maybe even some collaborations(?!).

Thanks to all the artists who presented and supported this crit and to Holly, Deborah and Ines for supporting as Team Turf. Together we made a really generous and inquisitive space and I am really honoured to have been part of it.

Many thanks to ‘A cap, like water, transparent, fluid yet with definite body’ exhibiting artist Bryony Gillard for leading the crit and for this writeup! Turf’s next free crit will be Sat 26 May, led by ‘Low Batt.’ artist Leah Carless.