MOTHERS is a collaboration between mothers and their children. It is a gesture to the care our mothers have provided, and are continuously providing, which was unpaid, invisible and not seen as real work.

MOTHERS will present work from ten collaborations and twenty artists, presenting attempts at losing artistic control, raising new insights into our relationships with our mothers and into experiences of motherhood itself.

The show will be accompanied by:

A screening & listening event on 4 Oct with work by Georgia Anderson, Jayne Parker & Gray Wielebinski. Georgia Anderson’s ‘Oral History’ (2017, 6m 23s) is two sound pieces recorded separately and put together, stemming from a recorded conversation with her mother Claire Anderson, on the street in Wolverhampton, in which they talk about when Claire gave birth to Georgia. Jayne Parker’s film work Almost Out (1985, 90 mins) is a confrontation/dialogue between the film-maker and her mother, both naked. Gray Wielebinski’s The Great American Eclipse (2017, 7 mins) uses cinematography similar to the thriller genre. Their mother Emily Maduro stars as herself creating a road movie crossing state after state in a bigger and bigger quest for the solar eclipse.

A reading and discussion group ‘Mums! Learning and sharing stories, struggles and solidarity’ on 6 October looking at a film from the NYC Wages for Housework archive and excerpts from Nina Lopez’s pamphlet The Perspective of Caring (published by Global Women’s Strike, 2017) and Silvia Federici’s Revolution at Point Zero (2012).

An artist talk and tutorials open to all students of Croydon School of Art, led by Dyveke Bredsdorff and Bronte Dow.

MOTHERS is organised by Bronte Dow and Dyveke Bredsdorff and is a curatorial collaboration with Ulla Rask. 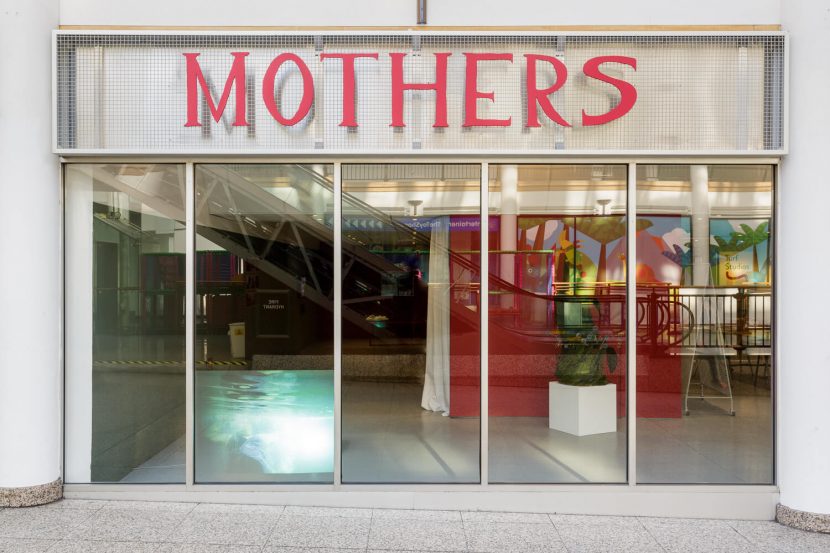 Rosemary Uddoh (born Cardiff), is a florist and flower arranging tutor living and working in Croydon for over 25 years. She makes floral designs for all occasions, including funerals and weddings, and regularly exhibits at flower festivals across the South East. Rosemary teaches flower arranging courses at various adult educational institutions in and around Croydon and also runs private floral workshops for groups and individuals.
Rosa Johan Uddoh (b. 1993, London) graduated in Architecture (BA) from University of Cambridge in 2014. She recently graduated from MA Fine Art Media at Slade School of Fine Art in London. The aim of Rosa’s artistic practice is to reach maximum self esteem. She works mainly through performance, ceramics and collage on themes of spatial agency, colonial memory and radical self love.

Sharon Thompson is a 60 year old mother and nurse working in Nottinghamshire currently managing Mental Health Services for Older People. Throughout her career Sharon’s focus has been on enabling communities access to healthcare; predominantly marginalised communities, homeless families, women fleeing domestic violence, children in care and Sure Start programmes. Sharon has a Masters in Public Health.
Hannah Regel is an artist living in London. She recently completed an MFA in Sculpture at the Slade School of Fine Art, and her first collection of poetry was published in 2017 by Montez Press. She is also the co-editor of the feminist journal SALT.

Fatma Unal, 1957 lives in London, she is a retired teacher and homemaker.  Her interests include nature, swimming, travelling, bio energy healing and creating dialogues with others.
Deniz Unal (1983, Istanbul) graduated from a MFA in Fine Art from Piet Zwart Institute, in Rotterdam in 2012. She primarily works with text and performance.

Louise Dow was born in New Guinea in 1960, and grew up travelling with a family of seven in remote places around Australia and Africa. She worked as an educator and writer/editor in Australia, then became carer of elderly parents. Mother of Bronte (born in 1991), she now enjoys being a casual museum educator.
Bronte Dow (1991, Sydney) will begin the MA Artist’s Film at Goldsmiths this year. She makes films and objects and writes in between and in spite of waged labour.

Ulla Rask (1953). Mother of five children. Yoga teacher and Nurse. Always looking for alternative ways of living – now living in a allotment garden in Cph.
Dyveke Bredsdorff (b. 1989) is a Danish artist based between Copenhagen and London. She graduated with an MFA in Fine Art Media from the Slade School of Fine Art in 2018 and works with text, sound, performance, photography and film. She also curates ilyd.nu an online exhibition space in sound in collaboration with Emilie Kjaer, currently collaborating with Shell-Like at Raven Row in 2018/19.

Agneta Almborg b.1951 is an educator specialised in language difficulties. She works at the primary school Enbacksskolan in the Stockholm suburb Tensta. She studied photography for one semester in 1967. She lives and is from Stockholm, Sweden.
Emanuel Almborg is an artist based in Stockholm and London. He works in a wide range of media with a focus on moving image. He finished the Whitney Independent Study program in New York, 2015 and is currently a PhD candidate at The Royal Institute of Art, Stockholm. His work has recently been shown at e-flux, New York, Bienal de São Paulo and Whitechapel Gallery, London.

Joyce Colclough (1931-2015) grew up in Derbyshire and attended Michael House Steiner School in Ilkeston before leaving at the age of 15, when she was taken out of school to work in her father’s newsagents shop. She possessed an intuitive intelligence and the potential to pursue many creative avenues, but belonged to a generation of women for whom further education and training was not an option. She had a great love for the theatre and was passionately involved in amateur dramatics for many years with The Prospect Players in Arnold, Nottingham. She was a consummate character actress and a creative seamstress and wardrobe mistress,  managing the drama group’s wardrobe from her loft.
Jayne Parker is an artist and filmmaker living and working in London whose work has been widely shown in  art institutions, on television and in film and music festivals. In 2008 a DVD compilation of her film works was released by the British Film Institute in their British Artists’ Film series. Her films are distributed by LUX www.lux.org.uk and she teaches at the Slade School of Fine Art, University College London, where she is Head of Graduate Fine Art Media. Her latest film The Oblique, featuring cellist Anton Lukoszevieze, premiered at the 64th International Short Film Festival Oberhausen in 2018. She continues to make photographic and sculptural works, extending her film imagery into material and physical space.

Emily Maduro was born in Hazleton, Pennsylvania in 1957. She received a scholarship to study at The University of Pennsylvania and started her own business from scratch when she relocated to Dallas, TX. She eventually sold her business after 17 years to take care of her 2 children. She still lives in Dallas where she has been a docent at the Dallas Museum of Art for almost 10 years and helps run the Family Place, an organization that empowers victims of family violence by providing safe housing, counseling and skills that create independence while building community engagement and advocating for social change to stop family violence. Some of her other interests include traveling, ceramics, crossword puzzles, reading, watching tv, gardening, and drawing.
Gray Wielebinski is an artist working between London and Los Angeles in collage, animation, sound, video, performance, and illustration and completed their MFA at The Slade School of Fine Art in 2018. Gray is inspired by the glitch, queer temporality, podcasts, quantum mechanics, Jennifer Lopez’ Green Versace Dress at the 2000 Grammy Awards, male bonding, conspiracy theories, queering the archive, clowning, and Surrealism. 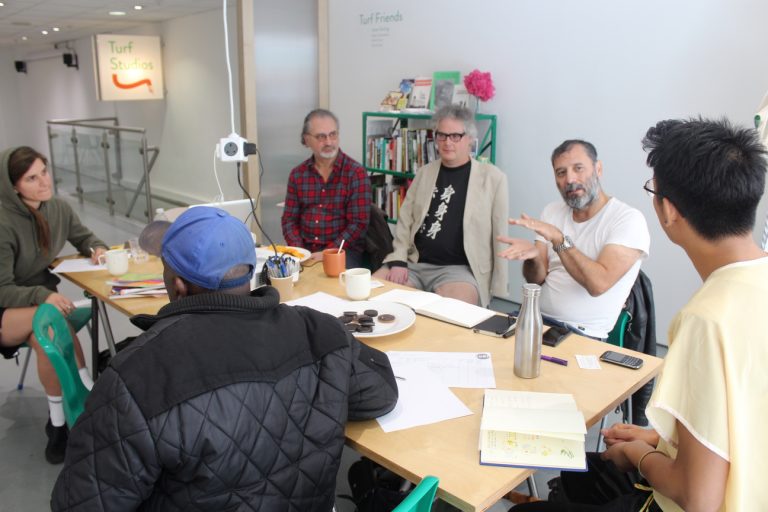 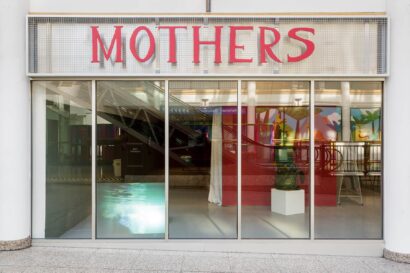 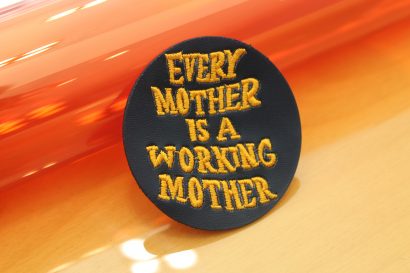