Last words, so it goes

Since the dawn of the digital, artists have been investigating the materiality of new technology and uncovering its craggy edges. New tribes are battling over virtual turf and others becoming extinct, leaving a landfill of virtual waste to rot and disappear.  So, what myths and stories can be excavated and restored from these virtual artefacts?

Featuring the work of seven emerging and established artists, working across film, performance, sculpture and writing, Last words, so it goes presents some of the challenges, fears and solutions to unchartered digital legacies. Tied by their archaeological and shamanic methods of storytelling, each artist encourages the viewer to step into a space where virtual phenomena collide with the analogue.

Stephen Cornford’s Constant Linear Velocity explores the physical space of digital storage with an assemblage of obsolete computer shells. It features the opening and closing of a disk drive; reaffirming our relationship with specific technological moments. Meanwhile Louis Henderson’s film All that is Solid sets out to explore the circulation of illegally exported electronic devices between the West and the developing world. In Accra, Ghana, the artist finds one of Africa’s largest electronic graveyards, where local groups extract the mineral worth of our abandoned technology.

Sasha Litvintseva’s Immortality, home and elsewhere uses Google maps like a virtual safari. In it, the artist-narrator moves from one suspended place to the next as we learn about the artist’s own personal brush with a nuclear disaster. Similarly, A Door Has Opened, addresses the audience from a place outside of time. In his work with neon words and objects simultaneously frozen and moving in space, Sam Austen exposes the physical and transient nature of film.

Daniela Zahlner’s installation Keep Swimming looks at the body’s relationship with new technology and its potential to fragment, reshape and augment experiences both real and virtual. Another body part—the hand—features as a motif in the installation Cradle Game, in which Linda Persson explores the uncanny side of technology. Influenced by early cinema and witchcraft, the artist engages with the flaws and failures of her equipment.

On opening night (9 Jun, 5-9pm) from 6.30-8.30 Francis Patrick Brady will invite the audience to participate in a discussion and role-play performance entitled Universal Scenarios for Peace. Somewhere between a Greek temple and a future casino everyone will be welcome to join in and contribute towards the performance of peace. 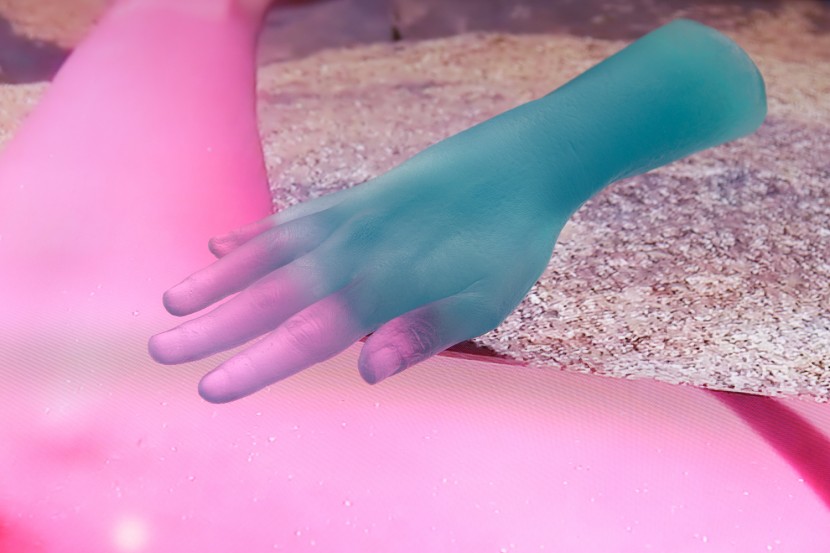 Jack Friswell is a Bristol-based artist and curator who is a member of the artist collective Runaway Fleas and a co-founder of Turf Projects. He has worked with the Tate Collection and other National Archives on the preservation and display of film and digital artworks. Sam Austen, (b. 1986 lives and works in London) is a graduate of the Royal Academy schools and Chelsea College of Art & Design. Early animated cinema, graphic novels, horror film, and science fiction are particular influences on Sam Austen’s work. Primarily he produces 16mm films that utilise a range of in-camera multi-layered special effects, shooting an array of studio built objects, material and texts. Stephen Cornford is a media artist who works with consumer electronics, critiquing the ideologies they embody and the constitutive role they have come to play in our lives. He recently completed a PhD affiliated to the Archaeologies of Media & Technology Research Group at Winchester School of Art. Louis Henderson is a filmmaker who is currently trying to find new ways of working with people to address and question our current global condition defined by racial capitalism and ever-present histories of the European colonial project. The working method is archaeological. Henderson has shown his work at places such as; Rotterdam International Film Festival, Doc Lisboa, CPH:DOX, New York Film Festival, The Contour Biennial, The Kiev Biennial, The Centre Pompidou, SAVVY Contemporary, The Gene Siskell Film Centre, Gasworks and Tate Britain. His work is in the public collection of the Centre National des Arts Plastiques, France and is distributed by Lux (UK) and Video Data Bank (USA). Sasha Litvintseva is an artist filmmaker and writer researcher, whose work is situated on the uncertain thresholds of the perceptible and the communicable, organism and environment, and entropy and quantification, at the intersection of media, ecology and the history of science.

Linda Persson is a Swedish artist living and working between Sweden and the United Kingdom. Her work often focuses on questions of that which is historically repressed, about to disappear, or maybe already extinct, such as certain languages or technologies.