What do we do when our bodies diverge from what is considered the norm? How do we as visual artists translate emotions, feelings and reactions that occur in the body? What are the possibilities and the limitations of sight? We ruminated over these questions and more during the course of the session. Through chronic illness, its psycho-somatic effects, the history of medicine, optical illusions, body shaming, queer visibility and a shared interest in the work of Jo Spencer particularly her current exhibition with Oreet Ashery, ‘Misbehaving Bodies’ a thread was drawn. 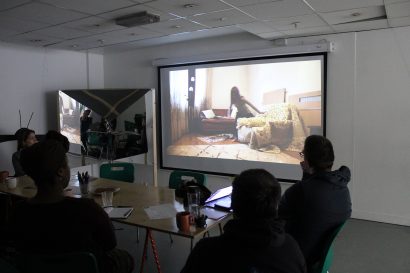 Lilana
How can one visually represent physical pain?
The video ‘On a scale from 1-10’ saw Liliana move from photography into a new medium in an (successful imo) attempt to centre motion. Working with a friend who’s a psychotherapist, the piece saw them take on a variety of bodily contortions in settings such as a living room and a public park. Uncomfortable, darkly humorous, powerful were some of our reactions to it. The videos also contained a lack of overlayed sound, utilising silence and the natural audio of each environment. By underplaying sound and having the body centre frame we all felt that the works invoked physical discomfort. Also accompanying the moving image works were a collection of photographs that pointed to the possibility of a mixed media installation. 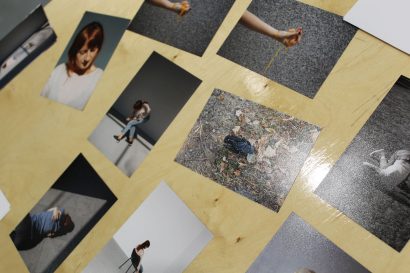 Ruth
What methods do we utilise for showing perspective in 2d work?
A body in black with a neon pink outline, legs turned left, one face eyes closed facing forward, another facing left, one arm pointing upwards with a single finger extended, the other arm pointed downwards, finger almost touching an embryonic figure. All of this placed upon a block coloured background with two blues navy and turquoise. This untitled figurative painting drew upon Ruth’s deeply vested interest in anatomy as well as optical illusions which was particularly evident in the two directions of the faces and arms. There was an inherent and agreed ambiguity with this figure, conventional markers of gender intentionally
removed. This obscurity also came across in the faces highlighting another topic of interest for Ruth – facial recognition. The many layers of the painting and areas of research behind it gave way for a rich discussion in which we saw how embracing duality can lead to a depth of perspective. 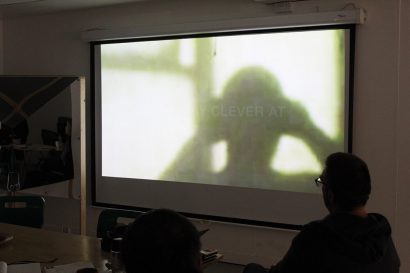 Lee
How much do we disclose of ourselves in work that is autobiographical?
Lee came to the session with a background in performance having worked with such methods as ventriloquism and thematically exploring what it means to be othered. With two videos ‘Let It Rip’ and ‘Wrong Kind of Fat’ Lee made a first venture into working with self.
‘Let It Rip’ took form of a personal history of sight, not seeing yourself, discovering a part of yourself through seeing. For many marginalised people the gaze comes with a set of difficulties and issues. Bodies judged, watched, surveilled and projected on. Throughout the piece there was a sonic motif of a rip pointing to the era which Lee grew up in with physical magazines, posters on bedroom walls, collage, x rated late night tv and Top of the Pops. The different accounts of queer desire and homophobia were done through text removing Lee’s figure and voice, a nifty tool to sharing something deeply personal however keeping a
part of yourself to yourself.
The next video ‘Wrong Kind of Fat’ did feature Lee with a hypnotic soundtrack of him repeating queer male archetypes against these words written over his torso. Although more exposed than the last, the rhythm and shorter length ensured that a balance between disclosure and privacy was kept.

Thank you Turf for inviting me along to the session!