Fungus Press Residency: ‘made known and navigated through’, Mandisa Apena

A shared consciousness sits in the roots of trees, spreads, grows…

Our stunted relationship with the natural earth means we are misplacing signs critical to our survival. In this current climate meltdown, humans can not afford to ignore the bountiful information stored within nature that’s being shared with us.

made known and navigated through is a journey through our local woods and beyond, with the aim of gathering knowledge and documenting these encounters. It’s also an attempt to publicise a private record of relearning how to direct oneself in the absence of commonplace signage.

Through the process of psychogeography, and the practice of Guy Debord’s ‘dérive’ (drift; unplanned journeys through a certain terrain, exploring by way of emotion and instinct), I explored the ‘public’ landscape of the woods, that often felt very private and distant. I imagined what kind of knowledge we could collectively glean from communing with our natural environment, especially in London. Consequently, I co-led a workshop with poets Tice Cin and Zahrah Sheikh. We used the human body and mind as a conduit for the voice of nature, embedding ourselves in a local woods (Coombe Woods) and using the framework of dreams to ‘let nature speak’ via our subconscious.

We can retune with natural spaces through engaging quietly with them – taking directionless walks and rebranching, limb to limb. We can walk without aim or direction, a transgression and rebellion of everyday politics.

This is part of an on-going project about modern communication. I’d love to hear your thoughts, and stories of communication with/in nature. Please email mandisaapena@hotmail.com to get in contact. 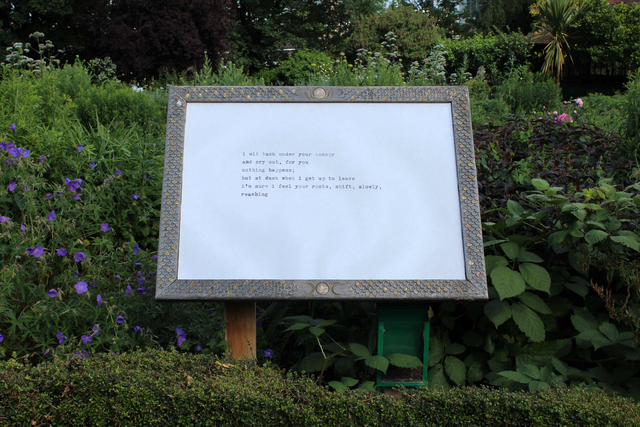 mandisa apena is a cancer sun and part time vegan from South London. they are interested in contemporary art, ecology, dreams and post-apocalyptic cannibalism. they are a Barbican Young Poet alumni, member of London Queer Writers, host of occasional queer poetry night poetry: ‘hot 4 u’ and author of self-published poetry book ‘and twice as bitter’.
Documentation