It was a pleasure to lead one of the famous lunchtime feedback sessions at Turf!

We started the session by following Miguel down to his studio in the Turf basement. For 4-5 minutes, while we saw his work, Miguel wasn’t allowed to speak. We saw a number of large canvases propped against the wall, as well as several smaller ones on a table. We began by trying to piece together elements from the paintings – all were textural (we later found out the paint was mixed with marble dust), and predominantly abstract. The colours were for the most part earthy and muted, some with touches of light blues and vibrant reds. Some surfaces felt wide open and expansive, some felt close and cropped in. One work felt like being inside a rocky crevasse – warm, claustrophobic, wrapped up. Another showed two boulder-like shapes locked in some kind of equilibrium, facing off or communicating. One painting clearly showed a landscape, however the surface was treated differently to the others – it was definitely a representation of a place, although it was a dream-like, half-remembered image.

Questions / thoughts we had:
Are the paintings a series?
Are they finished?
Are they interior or exterior?
Why are there some organic shapes and some geometric?

We now learned from Miguel that the paintings are based on a place in eastern Spain, near Valencia, where Miguel used to go on holiday when growing up. The paintings start from memories that Miguel has of the place, which then morph into their own images as the paintings develop. They have an internal logic or myth that comes to light as they are worked on. Memories are strange, distorted, pliable – the work reflects this, they zoom in and out, and give the impression of rocks, sand and horizon. Are the paintings a fond tribute? An exorcism? I ask Miguel if it is important that the audience knows about the story of the work, the childhood holidays – should this stay private or does he want it to be visible? He says that the work is the work, and he wants them to stand on their own. I like this.

Amanda spoke about a proposal she is working on for a project with UCL called Trellis. The project is in the form of a collaboration with a university researcher and will culminate in a public art commission at the Olympic Park. The project is about knowledge exchange and collaboration rather than just responding to research. Amanda has been meeting with a mathematician; her area of interest for the project is in the crossover between mathematics, economics and mysticism: the way in which people use maths to shape / predict the economy is more akin to mysticism than any logical / empirical process.

Amanda expressed a concern that her proposal as it stands is too expansive or far reaching, that she wanted to take a mallet to it and narrow it down. Her research for the proposal is definitely multi-faceted and incredibly detailed; everything feels well connected and important, and it was interesting to hear how her conversations with the mathematician have influenced the ideas as they have developed. Amanda showed us some early designs for metal plates, which might become manhole covers or wall plaques – these plates could also be used to make prints from, perhaps to make a deck of tarot cards. The designs show spiraling, repeated geometric designs combined with aphoristic statements about the economy.

We learned that Isaac Newton produced much more work on alchemy than on maths – these seem like different things today but in the past were closely linked. Both are about trying to understand our position in the world. The proposal made us think about language, entropy, and eternity. The way that maths may be a universal truth rather than knowledge – do we discover maths or invent it?

Djorfray showed us a film that he finished last year. The film is about 7 minutes long, and again for 5 minutes we discussed the work without Djorfray’s input. The film is part clay-mation, part drawn animation and part live action, and moves between these different media as the film progresses, sometimes overlaying them. Djorfray features as the main subject of the film, and the different animation styles give a sense of seeing different sides of him. Is the truer version of yourself the one that you have or the ones that people have of you? Plasticine, drawn or filmed? The work showed us clay-mation street violence, Blue’s Clues and Art Attack references, scenes from classic cartoons modified to make the main characters dark-skinned, and it featured a sporadic hip hop soundtrack. The film feels very intimate and personal; it has a sincerity that you don’t often come across. I found it disarming and moving.

Some questions / thoughts we had:
The film focused on personal experience of social issues, rather than wider representation of problems – is it a responsibility of artists to address wider issues? Holly posited that perhaps there is a risk of biting off more than you can chew. I agree – and I think the work’s personal nature is what gives it its power
The tone sometimes shifted – at times very sincere, and at times with some ironic distance. I speculated that this might make it versatile and able to fit into lots of contexts
The work feels like a self-portrait, with some elements pointing toward a narrative or message, and some parts being more textural / abstract

It was then really interesting to hear about Djorfray’s personal journey as an artist and how his life experiences feed into his work. He was very generous with his offerings. We spoke briefly about the lack of representation / visibility of black artists, and how this deters young black people from wanting to become artists, or feeling like it is something that is possible. (This is also true of brown artists). Djorfray is now working on a new film work, which I hope to see.

Rosie spoke about her work with LOFT, a space 2 floors above Turf projects. Rosie is the curator / facilitator of the space and is responsible for finding artists and projects to host. She spoke about how she didn’t go to university, and is engaged in the ‘art world’ through a different path. This has influenced her decision to curate an exhibition to coincide with degree show season in June that will only feature artists who have not had a formal art education.

The project is really interesting to me because of the way it pokes at a lot of things. It is a strong statement, especially when art education is becoming disgustingly expensive and inaccessible to a lot of talented people.

Rosie said that she wants to find artists whose work is of a high quality – good enough to be seen in a degree show. But what is it that makes work degree show quality? What makes work made for a degree show different to work made outside of art school? Commitment to ideas? To experimentation? This is achievable outside university of course, but uni does afford time, space and facilities to do it in. How is the quality to be judged? By what the work looks like? If art students emulate the formal qualities of art they see at college (which they do, either of their peers or of practicing artists) degree shows end up having their own visual language [c.f. TWP notorious degree show bingo card]. The ‘degree show’ is then something that is up for grabs, so to speak – something that is itself evolving rather being a benchmark.

Rosie mentioned that most of the submissions so far had been painting – I speculated that this probably will be true for the majority. One thing art school does is expose you to lots of different media and ways of working / thinking. Of course it is also much easier to experiment with woodworking, ceramics or welding etc. if you have access to (are paying for) woodworking, ceramics or welding workshops. Does this make art school a necessary evil? An investment? Or is it actually a Good Thing?

Rosie is finding artists through an open call, and we spoke about the difficulty of where to post this open call / where to find these artists in general.
Do you have to have an education to call yourself an ‘artist’?
Rosie is worried about not having enough work for the space. I suggested that that could provide an opportunity for a heavier curatorial hand.

Mamady is another Turf based artist, working in fashion design and styling. He showed us some images from his recent collection and show ‘Strings Attached’ which took place in the research space at Turf. Mamady’s work, similarly to Djofray’s, is personal – he draws from his lived experience and channels it into his work through metaphor and symbolism. This project is based around the words ‘suffering’, ‘realising’, ‘recovering’, ‘discovering’. Snake skin is used as a stand in for someone he knows, reflective details standing in for something or someone else. Layers of metaphor and allegory, butted up against each other, are then worn by someone else. I like this idea of somebody wearing someone else.

I got the sense from Mamady that fashion design is almost incidental for him – he is expressing what he wants to express and this time it was clothing but next time it might be something entirely different. He spoke about bringing together his Guinean culture with the European culture in which he now lives.

I really enjoyed his analogy of mixtape vs album. The collection he showed us is an album – he took his time over it, considered it, obsessed over it and finally released it. Mixtapes are quick, get turned around in no time; they are a place to test things out.

Thanks very much to everyone who showed work and joined in the discussion, and thanks to Holly and Turf team for having me. 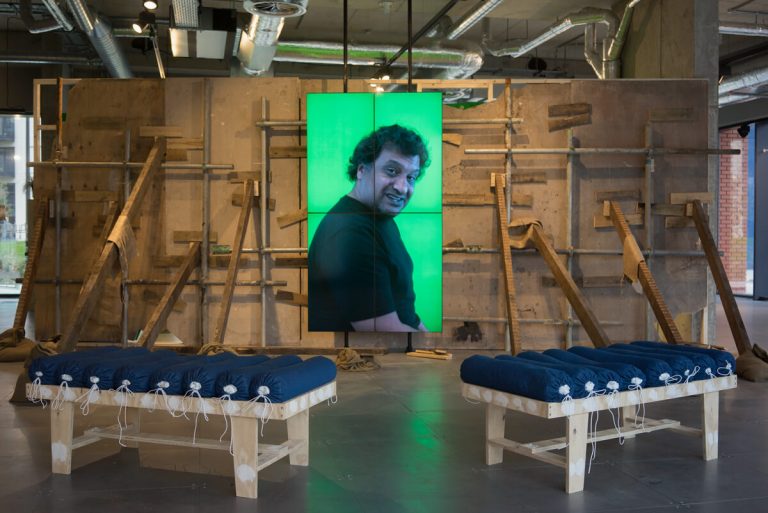