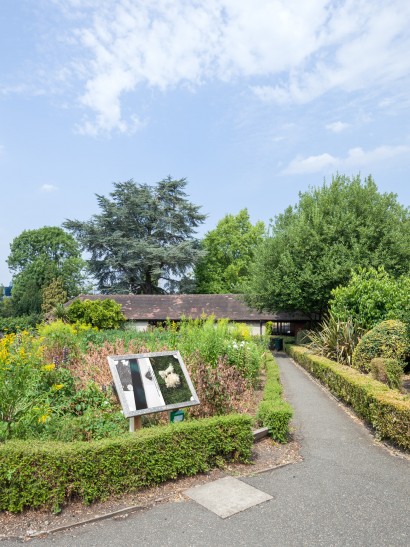 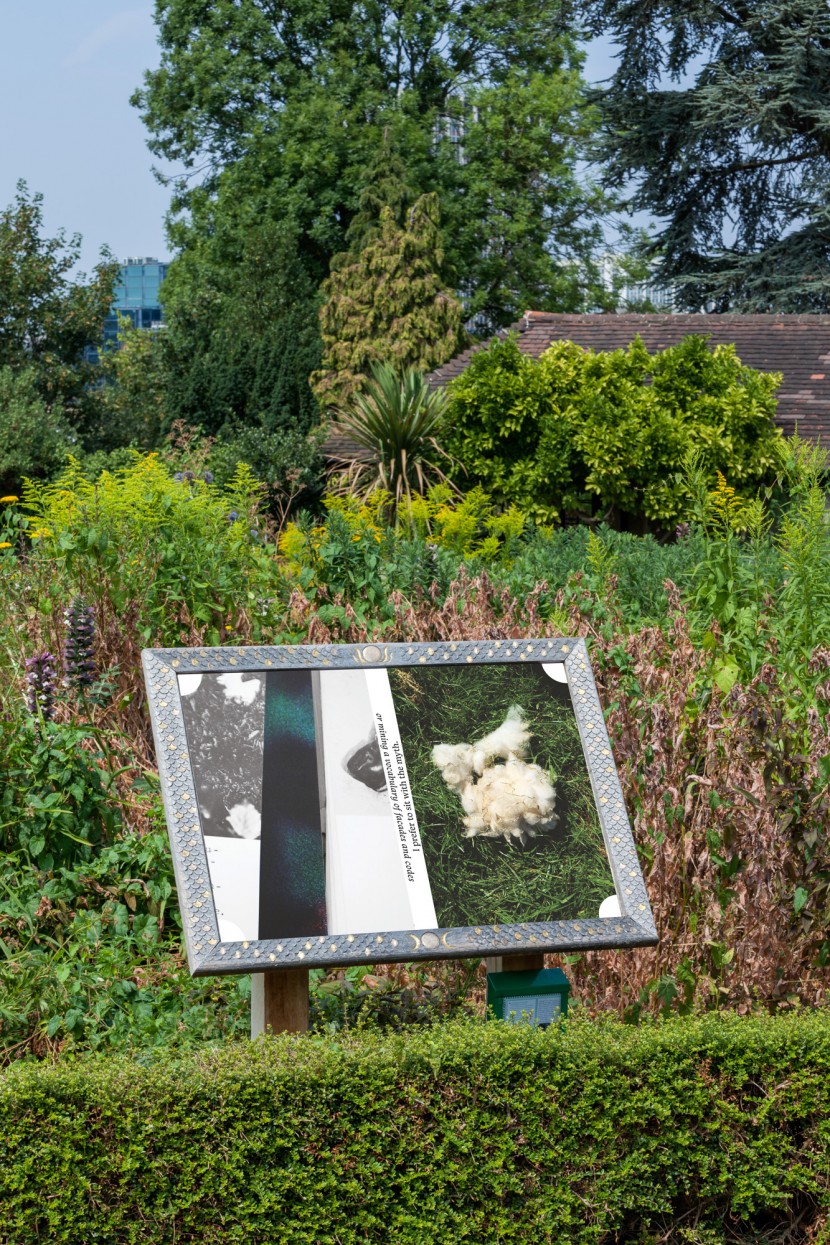 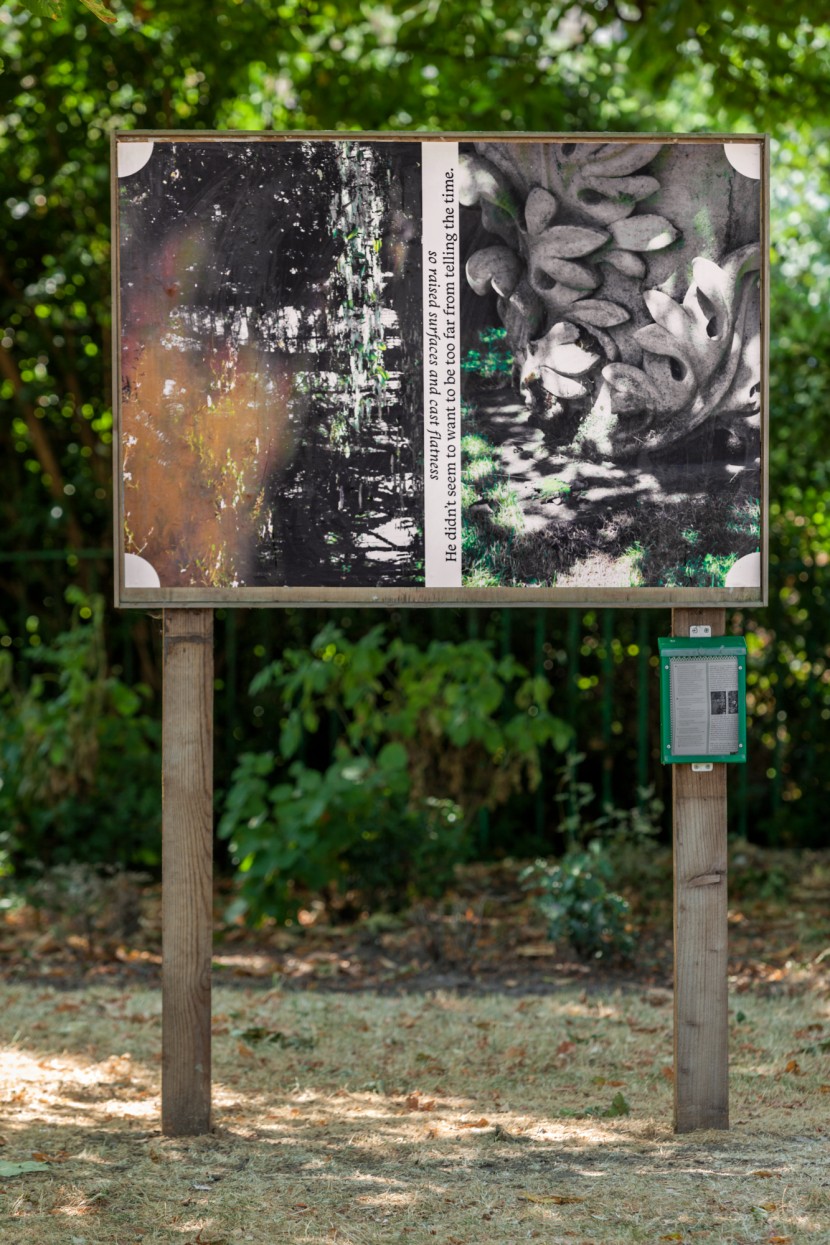 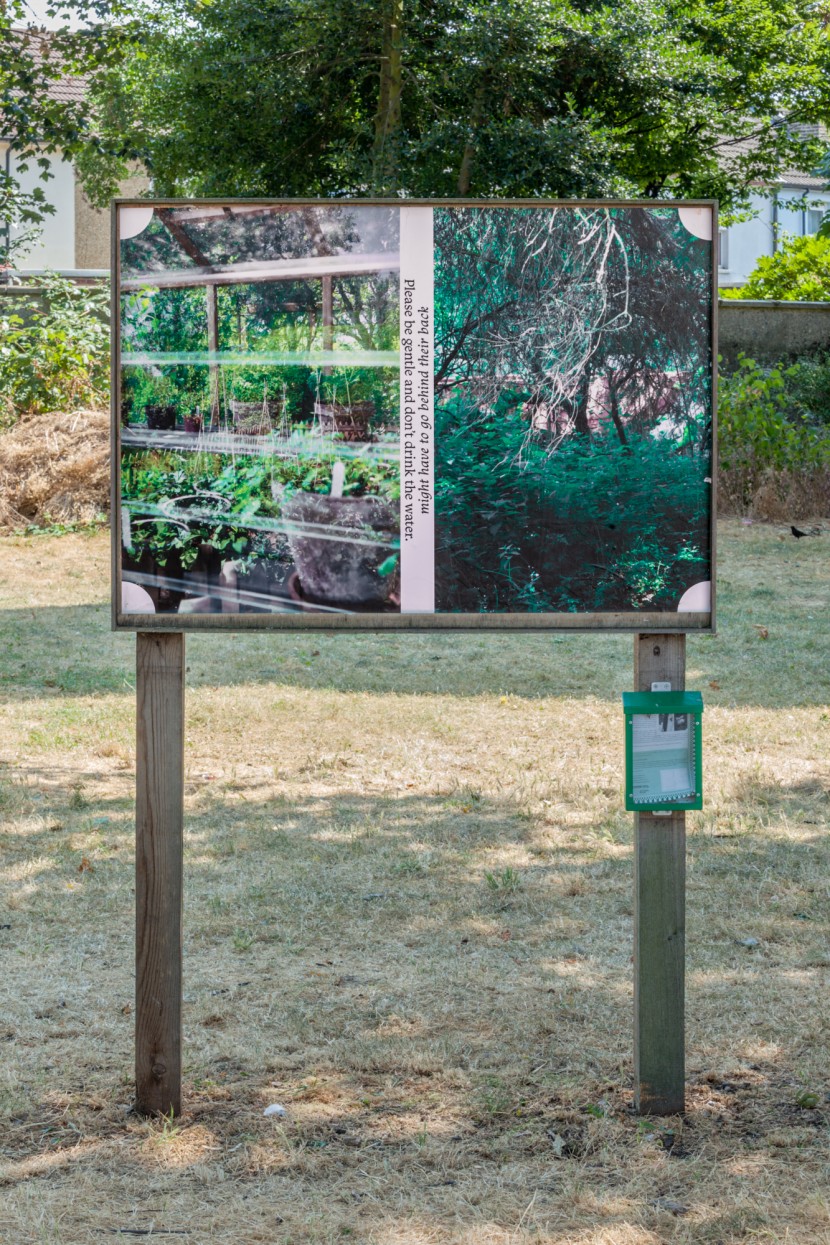 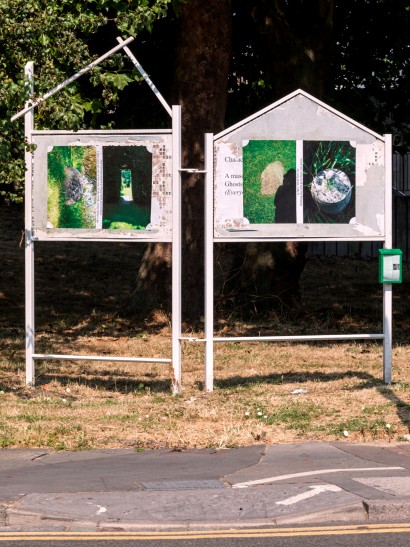 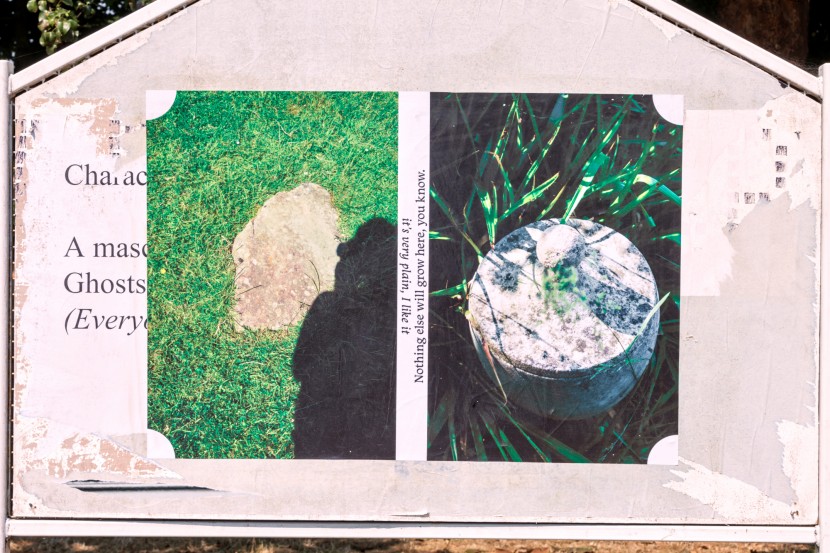 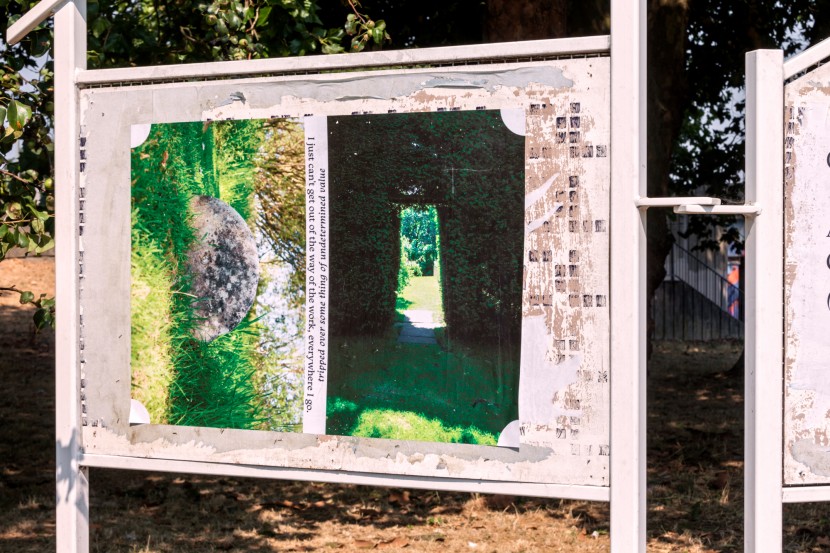 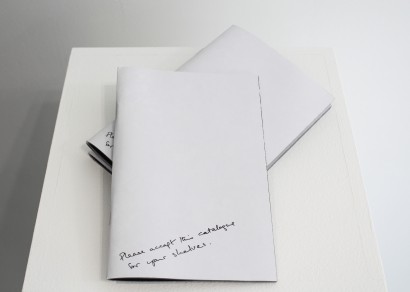 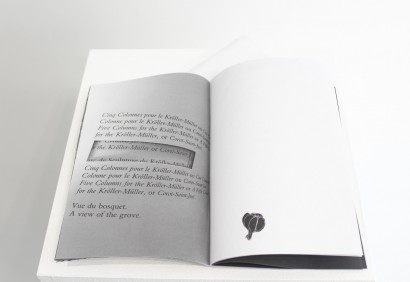 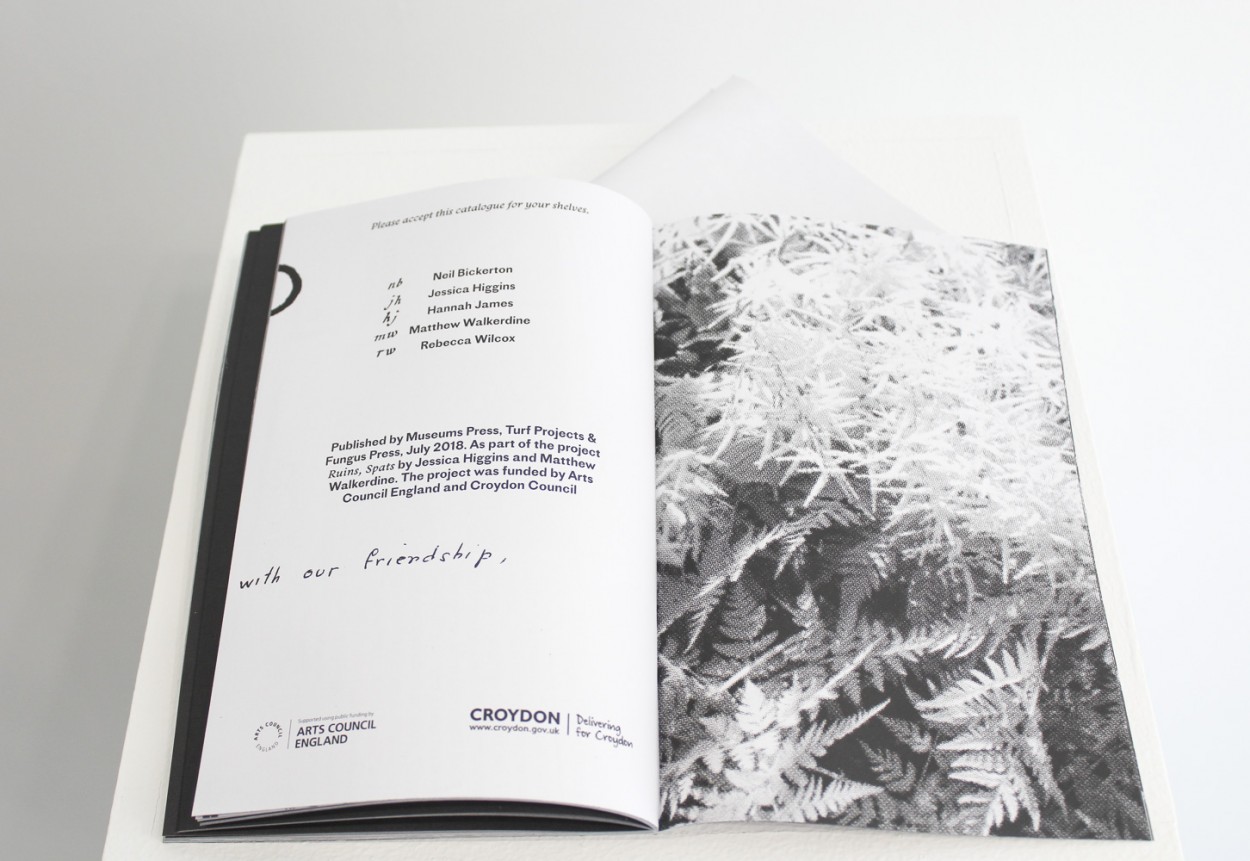 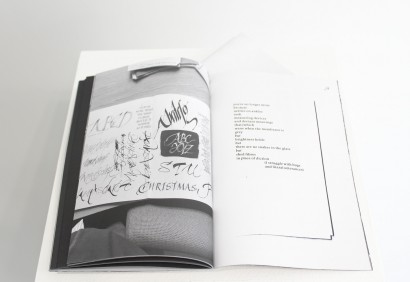 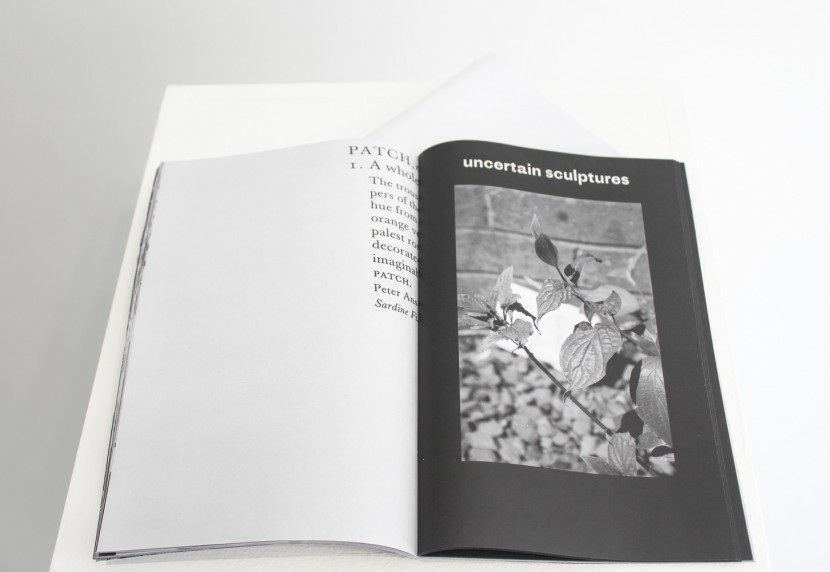 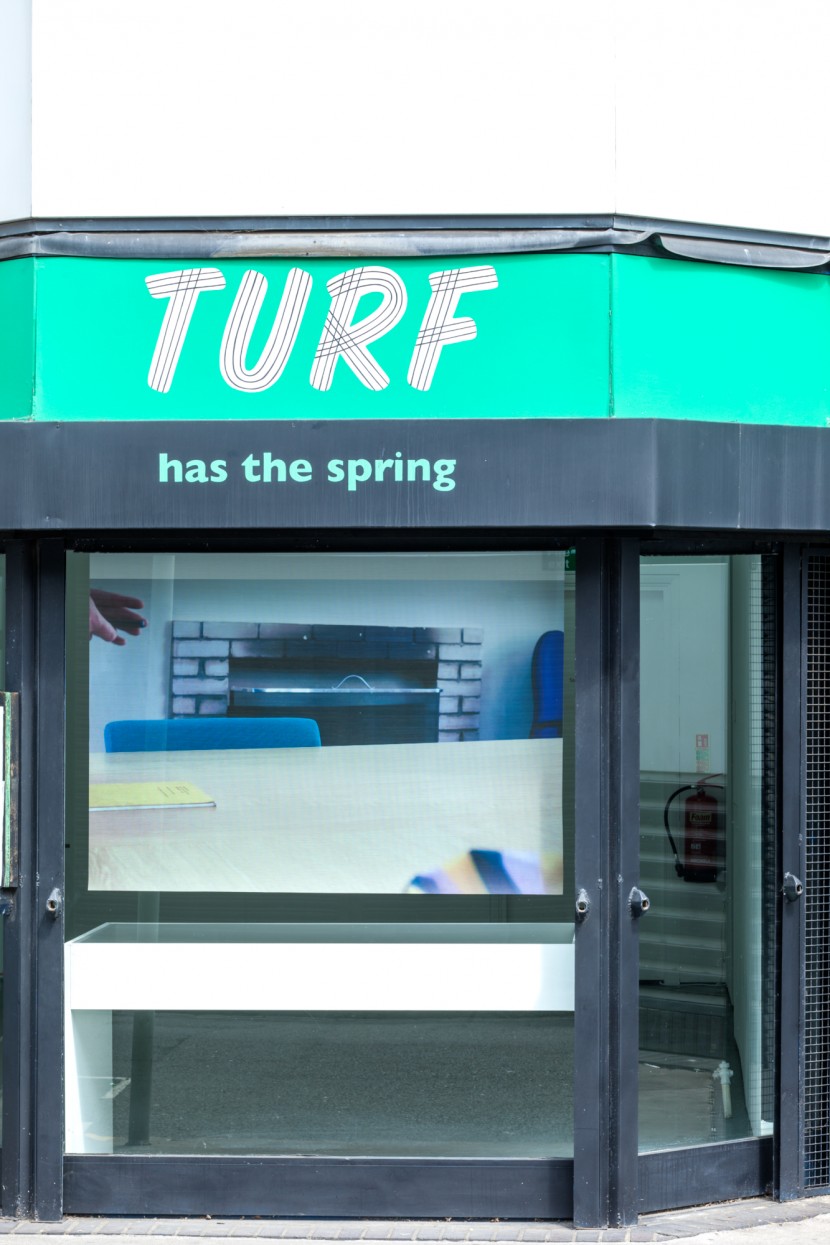 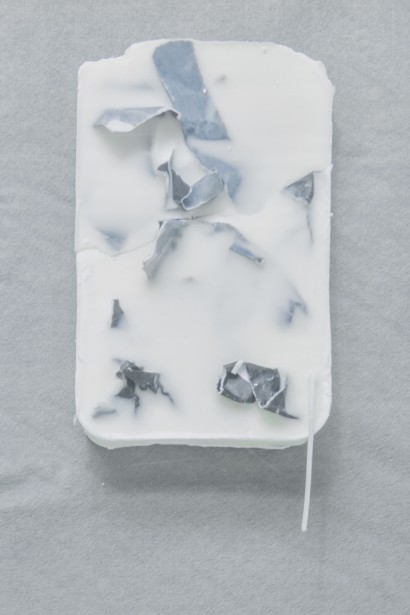 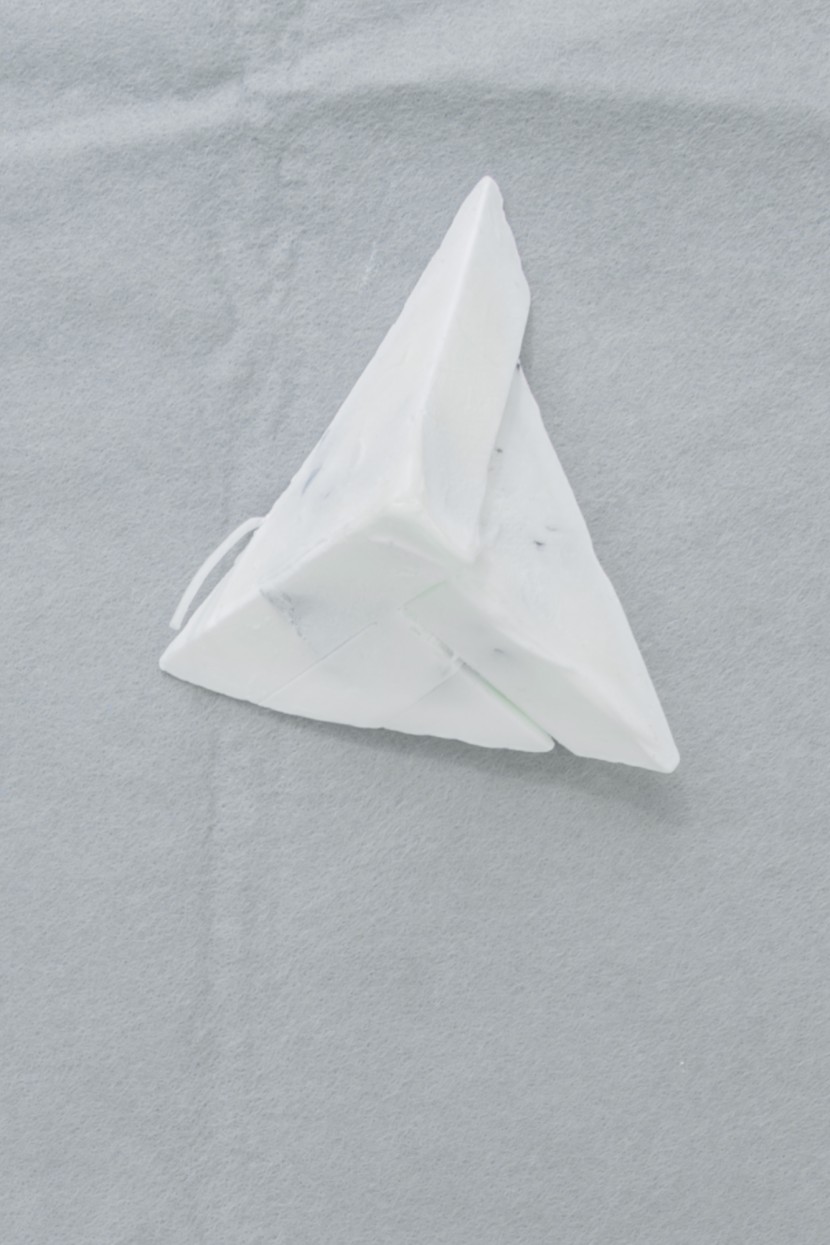 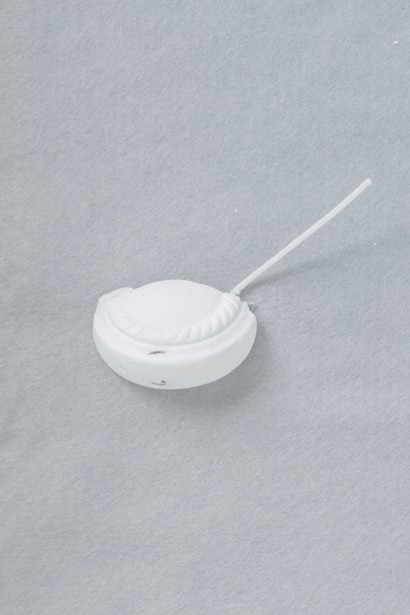 Ruins, Spats takes as its starting point two visits to Little Sparta, the garden and once-residence of Scottish artist, poet and self proclaimed ‘avant-gardener’ Ian Hamilton Finlay, following his proclamation that a poem can be ‘a model of order, even if set in a space which is full of doubt’ has been part of the Fungus Press programme’s modus operandi since its inception.

Little Sparta is a 5 acre property set somewhere between and to the south of Edinburgh and Glasgow. Established in 1966, it was built in collaboration between Ian and his wife Sue Finlay housing over 275 of Finlay’s artworks, some placed in the land, others forming the bedrock of architectural features such as paths or bridges. Open now to the public during the latter end of the week in summer months, Little Sparta also houses – behind its entrance patio – an extensive and disorganised library of books, predominantly of poetry, art, philosophy, history, gardening and some puzzle books and popular fiction. It costs £12.50 to visit and there is no public transport. Named after the Ancient Greek state which organised its entire society, constitutionally and socially, to maximise military proficiency above all, the site itself was the grounds of a number of disputes – deemed ‘battles’ by Finlay, notably over land taxation and classification of property .

A man at odds with the outside world, waging war with what he termed the ‘Secular Terror’ of the late 20th and early 21st century; his cantankerous and unapologetic view on territory and the artistic/cultural value of his work; his fascination with military architecture and machinery; and a history of antagonistic use of symbols and signs, the case of Ian Hamilton Finlay does not feel easy to untangle. The place of Little Sparta is wrought with tensions between the singular view of the artist – or architect and narrator – and the wildness of a garden, where nature’s properties and affects require a constant maintenance of the work. As Sue said “The learning process. The love involved in this process. That loving absorption  – the day to day tending of the poems.”

Ruins, Spats blends a response grounded from the sullying of proximity vs the romance of distance. Rather than valorise the legacy of the artist and Little Sparta as a singular work of gardening and a sculptural site, the project situates itself at a distance – examining the tensions between the private, autonomous space of private property, and the public, free space of a park, commons or street level arts space. We transpose surfaces and textures of organic and constructed matter, and echo phrases and thoughts, problems and reflections from the place; create myths of work and a confusion of touch and authorship, believing that authorship and property are porous, held in common and a refusal of the artists practise as an autonomous, fortress like structure.

A publication titled Please Accept This Catalogue For Your Shelves gathers candid images – yet edited and cherry picked from our own subjectivities/ handled by our authorship – from the library, where we find a plurality of voices, worlds and words, going slightly damp while the trust contends with various institutions in an attempt to transfer ownership and governance. Unlike the garden, here is where we find variety, plurality and a discursive body of texts, left behind closed doors. For the publication, we commissioned text based contributions from Hannah James, Neil Bickerton and Rebecca Wilcox. Publications can be purchased both online and from Turf Projects’ Gallery.

Museums Press est.2010 is the off and on collaborative endeavour of Jessica Higgins and Matthew Walkerdine. Once established primarily as a small press and publication project, the umbrella now holds all manner of actions initiated by the duo, most recently a residency at Edinburgh Printmakers, New Edition, 2017; and the initiation of a new imprint of writing by artists A Plume.

Jessica Higgins lives and works in Glasgow. Her practice posits acts of biography and fictioning in the production of sculpture, writing, performance and collaborative projects. Producing sites and situations among unstable narrative frameworks, she attempts to interpret the slipperiness of memory, interpersonal architectures and economies of language, leisure and labour. She has exhibited in group shows in Glasgow and elsewhere, and has performed in galleries, bars, music festivals and houses.

Matthew Walkerdine is a Graphic Designer and Lecturer based in Glasgow. His practice focusses on the production of printed matter that investigates unsung corners of the everyday, pop-music culture and fandom in tandem with a sensitive approach to print design.

Recent projects include: Mutters, New Victoria Gardens, Glasgow (group, 2018); I was a Teenage Medium, Glasgow Project Rooms (with David Roeder and Frieder Haller, 2018); The Grass is Green in the Fields for You, subscription service, 2018; and print projects with Mick Peter and Glasgow International, Fritz Welch, Jane Topping, Jessica Higgins & Nick Ainsworth, Curatorial Studio, Berwick Film Festival, Glasgow Sculpture Studios and The Glasgow School of Art. Matthew is a founding member of Good Press, a project space to support the promotion, production and sale of independent publishing and affiliated projects.