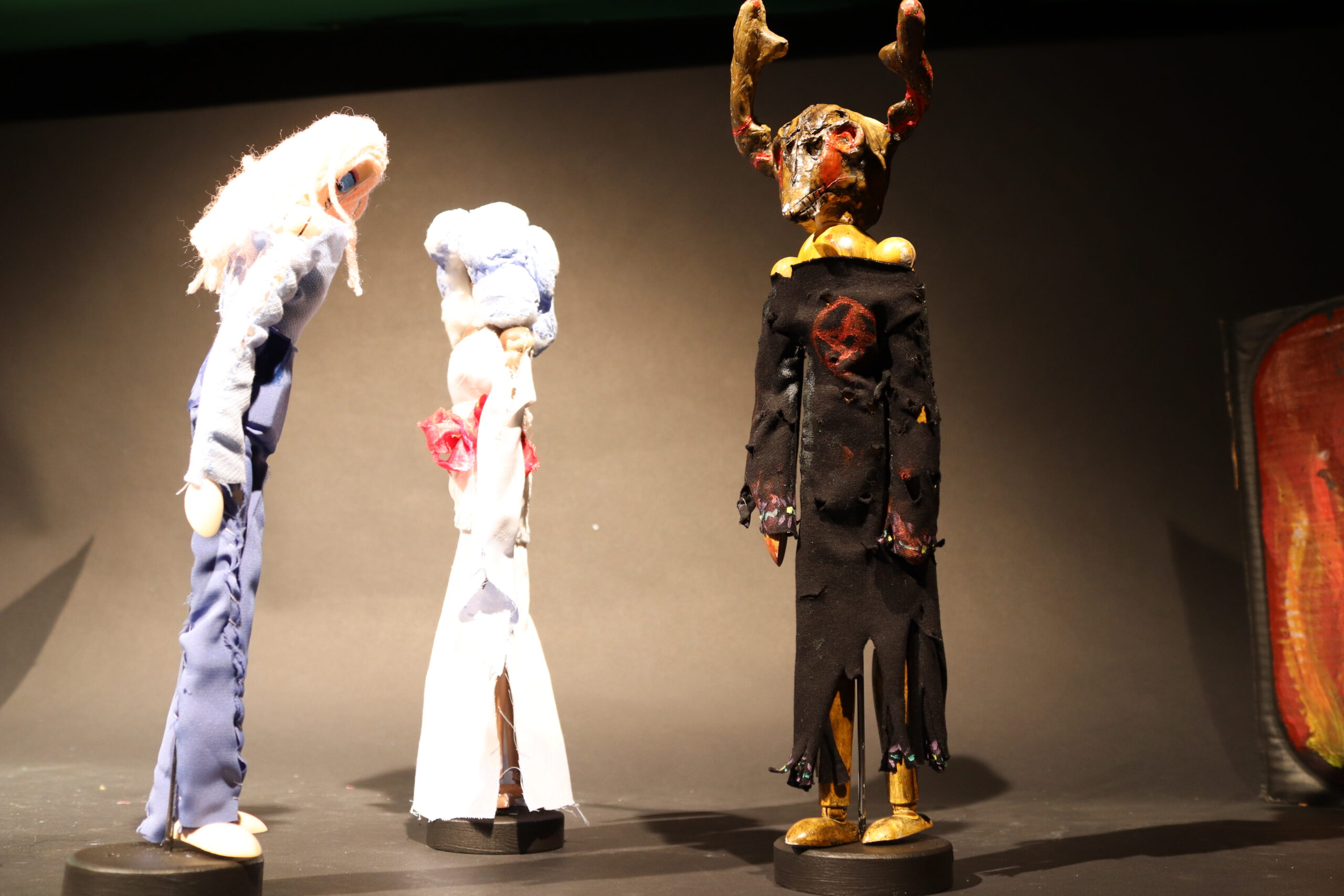 Resident LOFT curator Emma met with artist Katie-Rose via Zoom to find out more about her art practice and how she has adapted her setup for working at home.

What is your art style?
This is going to be a long winded answer because as much as I’m interested in Stop Motion Animation and would go as far to consider myself an Animator, I’m also an Illustrator and very interested in wanting to work with comics and that type of storytelling format. Maybe I’m similar to the people who created ‘The Clangers’ and ‘Bagpuss’ as a sort of nostalgic part of animation as I did do some Stop Motion Animation as a kid and also the creepiness of Tim Burton’s animations to have my new interest in things that are creepy and adding horror to my work. Illustration wise I’m very influenced by a lot of Japanese Media so a lot of Anime and Manga. I’m very interested in Junji Ito’s style, maybe I strive to have the creepiness like he does.

Why do you make art?
For as long as I can remember, which I feel like is a very stereotypical thing to say, but for as long as I can remember I have always had a strive to be creative if it was drawing and painting or if it was singing, dancing and acting. I have always just had the want to be creative and it’s sort of just my way of living, my brain is always creating, no matter if I am just walking to the local corner shop and I’m playing music and I’m thinking of all these scenarios in my head that I could put in a comic or I’m messing around with my ukulele making some sort of tune or I’m sitting in my room and I’m thinking what could I draw in my notebook today. I guess why I create art is because it is my form of survival. I’ve always done it, I don’t think there has ever been a point in my life where I haven’t had art to be a form of survival for me. I sort of live and breathe art wherever I go, I think if I didn’t do art I wouldn’t be able to survive.

What is your most important artist tool?
I don’t know exactly, I feel like my brain is telling me being influenced by art. I feel like to be an artist you kind of have to know what you strive to be, not like the stereotypical artist that we think of like Vincent Van Gogh or Leonardo Da Vinci – great artists, but I think artists that are very generic and everyone knows and everyone can be inspired by them. Surrounding yourself with art if you’re an artist because as I said in the previous answer for me art is a form of survival, I guess I really have to delve in deeper to it so I follow many accounts on Instagram of Artists, same with TikTok, same with Twitter, same with Tumblr. I think being able to look around at art and having art surround you is an important tool alongside having it as a form of networking and also just being able to look at what other people are doing and be inspired.
As for being a Stop Motion Animator a good tool would be getting Dragonframe and having a good setup. Dragonframe is the software I have been using to do some of my animations. In this pandemic I haven’t really done any animations because of that but Dragonframe is important to have and knowing how to use it correctly. But networking is an important tool and being surrounded and influenced by art.

How do you work/ what is your setup like?
I don’t own dragonframe at home; it is something I am able to use at college. The setup there is a dark room, a black setup and you have a camera and a tripod in front and that is how I work with the Stop Motion equipment, but again as we are in a pandemic it is mostly just setting up on my desk at home. I do digital art so it is mostly my laptop sitting in front of me, my tablet stand, my drawing tablet on top of that and then just the wires that connect everything somewhat neatly all around it and from there just drawing. That’s my setup. A slightly messy desk with a drawing tablet is my setup.

What is the first thing you do when creating a piece of work?
The first thing that I do when creating a piece of work is usually sketching what I envision my ideas to be. I think it’s important with animators, or anything that involves having to create characters, is to draw out your characters hundreds and hundreds of times to have an idea but also in animation figuring out what is the story I want to tell, what is the theme, is it about someone running away to a magical land or is it about someone escaping from a monster, that’s figuring it out and then after that I figure out the characters and the storyboard and then from there animating and making the characters.

What work inspires you as an artist?
As I mentioned before, I like Anime and Manga, I am also very into fandoms. I am very much a fangirl I would say so I usually get really inspired by fan artists or artists who I look up to. I mentioned Junji Ito, he really inspires me a lot as someone who is a horror fanatic. I do quite like his work. I like his work especially because he has a good eye for detail that is so amazing. Back in the summer of 2019 i had the honour of going to the Manga history exhibit at the British Museum and I remember seeing one of his panels and I instantly fell in love with how this man drew, because you would think that it was a big print that he did digitally and that would still be quite impressive but it was all done by hand via pencil and ink and it was just really amazing to look at and I was just really gobsmacked. Another person who really inspires me is Nagabe. A while ago I read one of his stories, ‘The Girl From The Other Side’, and I fell in love with the softness and sort of sweetness of his art style and how he really portrays soft movements.

When you reach a problem in your work, how do you overcome it?
I guess it depends on the problem. If it’s artist’s block, which I think many artists get, I usually go for a walk and clear my head. That’s the simplest way of dealing with artist’s block. But if it is a Stop Motion problem I’m not very tech savvy so I usually get one of the technicians at college to fix the problem. And motivation problems, I listen to a lot of podcasts, ones that tell stories. I listen to ‘The Adventure Zone’ by the McElroys and ‘The Magnus Archives’ by Rusty Quill. Listening to a story while I type up a boring bibliography really does put a nice little motivational boost into my work.

How do you escape from a creative block?
As I said you can always go on a walk and clear your head. I did a serial killer project and I made a whole playlist of songs that relate to the ideas and themes of serial killers to kind of put some motivation there for that project. Pinterest boards sometimes really help if you’re in the position where you don’t know what to do but you have somewhat of an idea. So vampires for example, you would look at gothic victorian, reds, fangs, long nails, bats and coffins etc. Just doing that and making a pinterest board really helps and it has helped me in the past when I have been really confused about what I have been doing. Also finding artists who have looked at similar themes is helpful.

What is success to you?
Since around the age of 12, my dream has been to become a comic book artist and to have my own physical comic book one day so I could be like the big comic book artist and inspire everyone else. And to have a physical publication that I know people are reading. That’s sort of my dream and that is what I would define as success for me but success is different for everyone. For example I could be a graphic designer and that could mean one of my logos is really influential and everyone knows it or for animators it could be their dream to work at disney and pixar or to work at dreamworks. It depends on the individual, but as a comic book artist my form of success is one day being able to have my own comic and knowing people are reading it.

To you, what makes your work successful?
I’m not really sure, I think the thing that makes my work successful is because I come up with, let’s say, interesting ideas that people seem to think are good but interesting ideas can always lead to underwhelming outcomes. I’m not sure what makes my work successful, I guess it is because of the ideas aspect and also the fact that I put in the research and the effort and I use my contacts as and when for who can relate to each project. For example I mentioned I did a serial killer project and thankfully I have a mother who does Criminology so it was really helpful to have that contact that adds more leverage to the project.
I would say make your projects interesting for success, I think that’s why mine have always been so successful.
Because I come up with interesting ideas and I have interesting viewpoints on the world that is why my projects have been received well. I am fortunate to have contacts that are criminologists or have done things in the past that relate to projects I have done. Also with projects a lot of the time I pick themes that are really weird and out there, I did one on serial killers, I did one on my Jewish origin, one on ‘The Red Shoes’ by Hans Christensen Andersen and also the movie with the same name. I have also done one on vampires and there was also ‘All Good Girls Go To Hell’ and those projects were engaging because they were all a weird part of me. Like ‘Good Girls Go To Hell’ was about religious views and I have an interesting relationship with christianity. Make them interesting and sometimes do make them personal and make it something that relates to you and interests you.

Thank you to Katie-Rose for hosting the first Residency Workshop. You can find more of Katie’s work here: